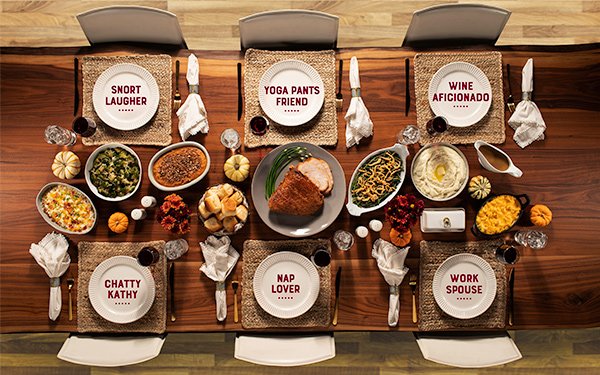 Viewers will likely rejoice that Honey Baked Ham will not run its "KellyBaked" TV spot again. Instead, it will introduce fresh new content for the first time in two years.

The “It’s No HoneyBaked" creative, developed with BBDO Atlanta, is built around its two core holiday products — ham and turkey — and injects some humor and modernity into a brand laden with heritage and tradition.

A spot for Honey Baked Turkey Breast riffs on the millennial-favored Friendsgiving holiday, where friends, rather than family members, gather for a big meal.

The #Glazeworthy creative includes BuzzFeed-like social quizzes, as well as what the brand calls the first "Facebook tagable place setting" to encourage people to share HoneyBaked’s Facebook post and tag the friends they would invite to their dinner party.

Honey Baked's Ham creative thrusts some personality into its messaging by showing people expressing their preferences for Honey Baked over other options. One ad, for instance, quips: "He gave me a diamond ring. It’s nice. But it’s no Honey Baked.”

The fully integrated effort kicks off this week with digital work in support of the turkey, and follows next week with the launch of television, radio, out-of-home and digital to promote the ham.

There will also be a social-media component specifically targeting people trying to hack the HoneyBaked recipe.

"In analyzing Google search data, we found that searches for the Honey Baked Ham glaze recipe spiked over Thanksgiving and Christmas," says a BBDO representative.

Six-second YouTube bumpers go directly to people searching for/watching ham recipe videos. There are numerous Honey Baked Ham recipes on Pinterest, noted the rep. "So, we created Pins to be served right alongside those DIY recipes, poking fun at the fact that 'a 'Honey Baked Ham’ by any other name is no HoneyBaked.'"