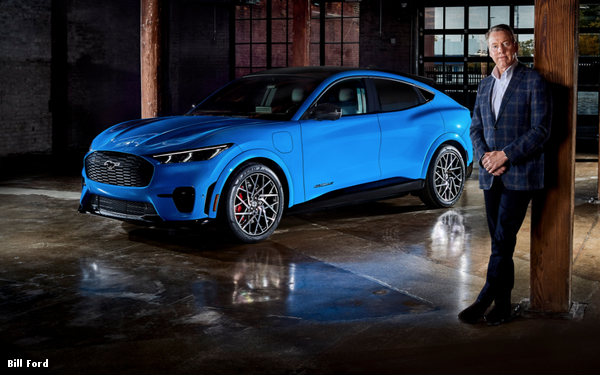 LOS ANGELES — Ford Motor Co. is taking a chance in lending the Mustang brand to a completely new vehicle that bears little resemblance to the iconic sports car.

“Ford purists may say it’s blasphemy to associate the Mustang name with an EV, but it’s smart to use a name that people are already familiar with,” says Jessica Caldwell, Edmunds executive director of Insights. “One of the biggest barriers to EV adoption is consumer education, and the Mustang name grabs attention and has a built-in buyer base who will be curious to learn more.”

Bill Ford, Ford’s executive chairman, says the vehicle is  “for a new generation of Mustang owners.”

“At the first-ever Detroit auto show, Henry Ford said he was working on something that would strike like forked lightning,” said Ford, referring to his great grandfather, who was the automaker’s founder. “That was the Model T. Today, the Ford Motor Company is proud to unveil a car that strikes like forked lightning all over again.”

Ford used influencers to tease the vehicle's unveiling via an Instagram campaign. A 60-second video features actor Idris Elba. The integrated campaign was created and developed by BBDO and represents the agency’s first vehicle launch campaign since being named Ford’s global creative agency partner. It will run through the end of the year.

The acceleration and horsepower of the Mach-E will rival that of a Porsche 911, according to the automaker.

Because of the enormous costs of establishing new model names, Ford is leveraging the footprint of its best-known names. This is the first expansion of the Mustang brand in its 55-year history

Ford believes that by lending the Mustang brand to the Mach-E, it will break down some of the barriers of entry for customers interested in, but wary of electric vehicles, providing instant brand recognition, Ford insiders tell Marketing Daily.

It's risky to try and leverage a popular brand name on a separate vehicle, particularly if the new vehicle isn’t similar to the original, says Karl Brauer, executive publisher at Kelley Blue Book and Autotrader.

“However, as with any new vehicle launch, a well-executed model can succeed regardless of name,” Brauer says. “But the opposite is also true — a poorly-executed car will fail no matter what it’s called. In the case of the Mustang Mach-E, Ford is promising compelling performance and attractive styling that pay proper homage to the Mustang brand. If that holds true, borrowing Ford’s most iconic name for its new electric SUV won’t cause any damage, and might actually contribute to awareness and sales.”

The automaker is also prepping three versions of the Ford Bronco SUV, the first of which will be unveiled in spring. Despite the fact that Ford folded the Bronco name in the mid-1990s, it has enormous brand awareness, according to Ford.

The automaker is also making the installation of home charging stations easier with a partnership with Amazon, sources say. Details will be forthcoming.

To help placate “range anxiety,” the Mach-E goes from 230-plus miles for some trim levels, to 300-plus for others. The vast majority of charging will take place at home, but for road-tripping, the FordPass app will guide the Mach-E driver from point to point, advising on which route provides the most efficient trip that would include fast charging along the way.