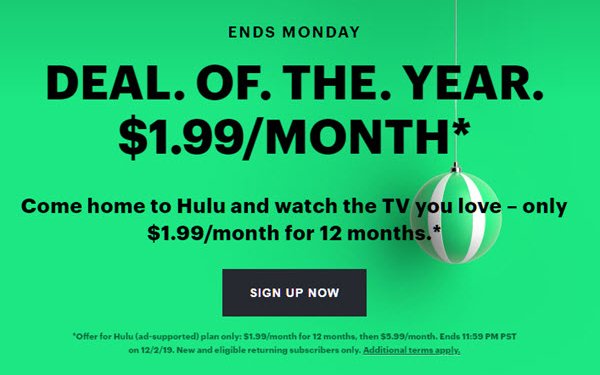 tarting Black Friday and extending through Cyber Monday, Hulu is offering its basic, ad-supported package — which normally costs $5.99 per month — for $1.99 per month for the first year.

To be eligible, consumers have to be new Hulu subscribers, or have cancelled Hulu more than 12 months ago.

In addition, the offer can’t be combined with other promotional offers for the Hulu ad-supported plan, including the new $12.99 bundle with Disney+ and ESPN+.

When both its ad-supported and ad-free services (normally $11.99 per month) are included, Bernstein estimates that Hulu’s average monthly revenue per subscriber dropped to $4.13 per month in the fourth quarter, from $4.36 per month in Q3.

“It seems the effective subscription price for Hulu SVOD is very low,” and even at that, Hulu’s Q4 net paid subscriber growth was modest, pointed out Bernstein media analyst Todd Juenger.

While Disney recently announced that it’s hiking the price of Hulu Live + TV to $54.99 per month, from $44.99, Juenger estimates that Hulu’s monthly programming costs now come to $55/month.

Including advertising revenue and all subscriber fees, Hulu generated $1.94 billion in revenues last year, but showed a net loss from continuing operations of $774 million.