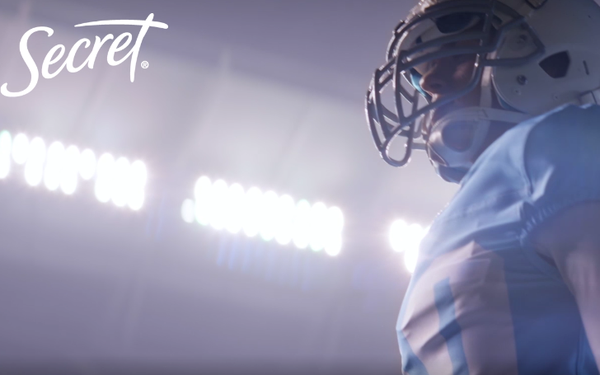 This makes sense, but it may not sound obvious: In a sports industry dominated by beer, athletic apparel and sports drink marketers, for the last few years, Secret deodorant has been pushing women’s sports, particularly soccer, and donating to its causes.

Now the Procter & Gamble brand has produced a seven-second ad showing a kicker sailing a football through the uprights used for field goals or extra points. A male fan in the stands cheers along with the crowd. Then his facial expression quickly turns quizzical.

The ad ends that way now, but it has a presumably big payoff on Super Bowl Sunday.

But because it’s Secret, we can guess what’s baffling the fan is that the kicker is a woman.

The teaser is on social media and Secret’s own sites.

There’s more to come next week, when Secret continues to unravel its own secret -- with an ad, debuting Jan. 27 during “The Ellen Show” and on the program’s social sites.

The next day, Secret has arranged a YouTube takeover, assuring that everyone who comes to the site will have that new ad plopped before them before they see anything else.

And then on Super Bowl Sunday, during the CBS pre-game show, Secret has arranged for another new 60-second ad, “The Secret Kick,” that should clear up the mystery.

“While we cannot yet unveil who is in the spot itself, Secret partnered with two unexpected high-profile athletes for the ad,” says Sara Saunders, the associate brand director.

Who can those athletes be? It may be worth remembering that in September, after the Tampa Bay Buccaneers missed a game-winning field goal, Secret took out an ad in the Tampa Times headlined, "Hey Bucs Fans, Do You Sweat 34-Yarders?" The copy began, "Carli Lloyd doesn't" -- referring to the women’s Olympics team soccer star.

The ad showed a photo of Lloyd, ,who in August was reportedly approached by some NFL teams looking for a field goal kicker. She also was videotaped kicking a 55-yard field goal during a Philadelphia Eagles practice session.

For ad professionals, the Secret ads may have some added interest. P&G's chief brand officer, Marc Pritchard, bragged to attendees at the Morgan Stanley Global Consumer & Retail Conference in New York in December that Secret no longer has an agency of record.

The ads are produced in-house, which Pritchard says results in commercials that are sometimes produced for just one-tenth the cost, and in one month rather than five.