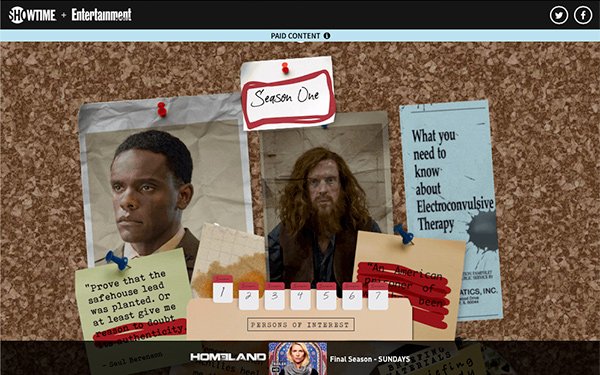 Meredith Corp’s branded-content studio The Foundry and Entertainment Weekly partnered with Showtime to create a custom, immersive “Homeland” campaign to coincide with the show’s final season.

“One of our favorite components about this campaign is that it’s a first-ever partnership between Entertainment Weekly, our branded content studio The Foundry and an entertainment advertiser,” Cara Deoul Perl, vice president, head of creative strategy, for Meredith’s Foundry, told Publishers Daily.

“Homeland” is set to end after eight seasons on the air, providing a singular opportunity for the Meredith teams to tap into the show’s history.

The campaign includes 14 videos with expert commentary from EW editors on a dedicated homepage designed to resemble character Carrie Mathison’s conspiracy wall on the show, which she uses to solve mysteries.

Visitors can click on each of the featured images to uncover an important clue related to the season’s story arc, in addition to watching three video clips per season. The clips include one featuring an important moment from that season and two custom-created videos with commentary by EW’s Derek Lawrence and Seija Rankin around that season’s more shocking moments.

“Since Showtime came to us for a final season push versus a new show launch, we were able to capitalize on seven years of recapping "Homeland," running trailers and teasers to create an immersive content experience celebrating the show’s history and the marking of its final season,” said Blair Thill, director of content-strategy at Foundry.

The Foundry was approached by Showtime in April of last year and kicked off their partnership ahead of the holidays in December.

“When we are able to go beyond the typical media buy and create something super-customized for an advertiser, we’re able to leverage, in this case, our EW talent in a way that reinforces their expertise,” added Perl.

The campaign is distributed to Meredith’s audience via dark posts from EW’s social handles and through ad units across EW and other Meredith entertainment sites, as well as Showtime's social media.
ad campaign, cable tv, content, magazines, tv
Next story loading