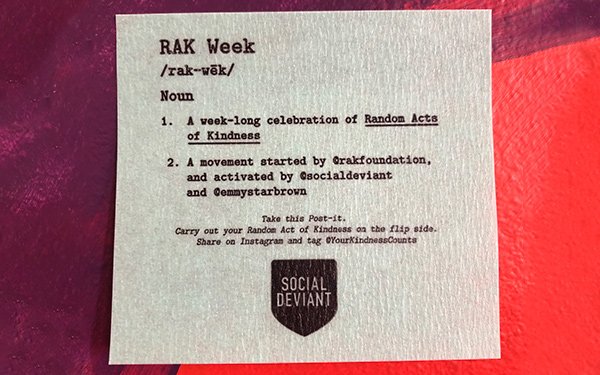 SocialDeviant is unleashing so-called “random acts of kindness” (RAK) throughout Chicago as part of the agency’s mission to honor its stomping grounds and become the world’s kindest company.

“There is kindness in all of us, and the world is a better place when all of our kindness shines through,” says Marc Landsberg, founder and CEO, SocialDeviant.

This year’s “Kindness in the Wild” activation centers around a brightly-designed 12’ by 6.5’ mural painted by local artist Emmy Star Brown. Her work is temporarily installed in the lobby of the James R. Thompson Center, a high-traffic pathway to the subway which thousands of people pass through each day. It will be there from Feb. 18 through Feb. 21.

The mural is initially covered with hundreds of specially-created RAK Post-its that each describe one random nice gesture, ranging from smiling to a stranger to buying coffee to the person next in line. Passersby will be encouraged to take one by members of the SOCIALDEVIANT team. Then, each time a person completes one task, an agency worker will remove the note, slowly revealing the full mural’s message of kindness.

Do-gooders are also encouraged to share their good deeds by posting a picture of the card and/or kindness in action to Instagram, as well as hopefully to challenge friends and followers to spread some kindness, too.

SocialDeviant, for its part, has set up an Instagram page under the handle @yourkindnesscounts. The entire activation is also being captured via a time-lapse video to be released via SocialDeviant’s social channels.

To further raise the visibility for the project, agency staffers are extending the  “wilding” campaign to the streets of Chicago, sticking the Post-its on walls and public transportation and handing them out to the public. In total, 5,000 RAK cards will be spread around the city.
Each February for the past eight years, the agency has celebrated its anniversary by actively encouraging its entire staff to give back to the community. This has included paying it forward at local coffee shops, schools and senior residences, in addition to volunteering to pack food at the Greater Chicago Food Depository.