For Media Sellers, Flexibility Is The New Norm 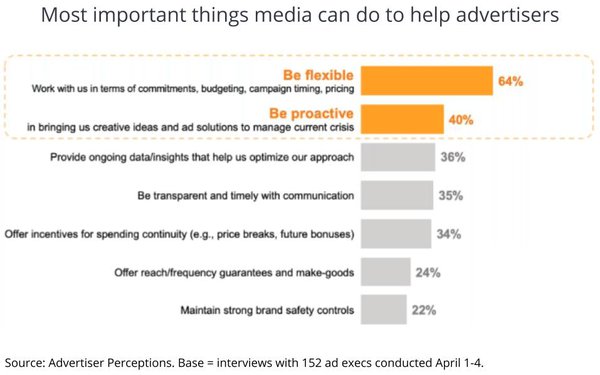 A couple of months into the U.S. COVID-19 pandemic, consumers, advertisers and media outlets are adjusting to new norms, and as far as the advertising marketplace is concerned, it means increasingly flexible terms and ways of doing business.

That's a sentiment that has been percolating anecdotally and in some straw polls, and it was reaffirmed this week in the findings of the second wave of Advertiser Perceptions COVID-19 tracking study of the ad industry. The No. 1 thing ad executives said the media could do to help them through the crisis is to "be flexible," especially in terms of the terms of ad commitments, budgets, campaign timing and media costs.

Sixty-four percent of the 152 advertisers and agency media buyers interviewed by Advertiser Perceptions cited flexibility as their No. 1 need, echoing a similar finding from an informal series of "ad checks" conducted by equity research analysts at BMO Capital Markets in recent weeks.

Amram said marketers in many categories are scrambling just to "keep the lights on," and in many cases, that means cutting ad spending or negotiating better ad prices so they can stay active in media.

On the plus side, he said marketers like Heineken that normally spend a significant part of their marketing budgets on sports sponsorships and other live events, are reallocating some of that money back into advertising, but even so, they need to weigh it against the need to put it to their "bottom line" in order to remain liquid and solvent as businesses.

"In a world where you can’t reshoot (ads), can you help us come up with ideas that way," Amram said, implying that many media companies, especially TV outlets, have programming and other assets that might help brand marketers fine-tune their ad campaigns to stay relevant.

In terms of the impact on the media marketplace, Amram painted a flexible scenario for futures markets, especially the network TV upfront advertising marketplace.

He said it is now apparent that there will not be a traditional upfront in May, which is when the networks normally host big extravaganzas to prime advertisers to commit budgets. While the networks still plan to host "virtual" upfronts online, Amram said it's possible that negotiations might not begin until "the end of the fourth quarter" and that they might results in "five-quarter" upfront deals that are "more calendar-focused" as opposed to the normal September through August broadcast year schedules. 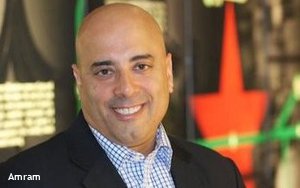