Snoop, Corona And The Fine Life 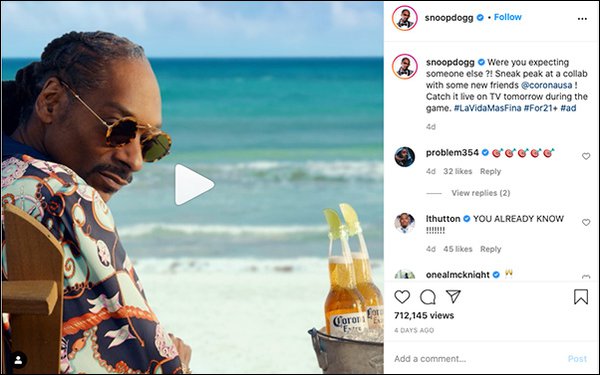 Corona is tapping Snoop Dogg to serve as brand ambassador as the company unites all of its various products under the “La Vida Mas Fina (The Fine Life)” platform.

“Snoop knows what matters in life and actually lives out those values, making him a symbol of modern-day sage wisdom on living the fine life,” explains a representative.

The campaign, developed with Mullen LA, celebrates optimism and choosing to appreciate the bright side of life.

The messaging marks a refreshed take on an earlier campaign.

The campaign began to take shape earlier this year but was paused in light of COVID-19 and the racial injustice protests that have swept across the nation.

The campaign’s debut coincides with the return of professional sports, a category Corona has long supported.

The media strategy first launched on Corona’s social channels with a dedicated GIPHY library as well as via Snoop’s heavy social media presence. It is supported with other digital media, PR, and TV spots that will air during the NBA playoffs and finals.

In an effort to share a “diverse” set of perspectives, the campaign will soon introduce other celebrities with their own takes on La Vida Más Fina.