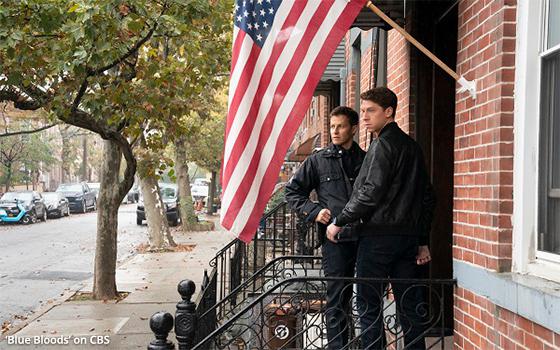 CBS’s venerable cop drama “Blue Bloods” makes its belated return for an 11th season this week with an episode that inevitably encompasses aspects of two of the major themes of 2020 -- COVID-19 and allegations of police brutality and racism.

Writing an episode in which Police Commissioner Frank Reagan (Tom Selleck) faces off against an activist politician -- New York City Council President Regina Thomas (Whoopi Goldberg) -- leading a battle to defund the NYPD was a no-brainer.

One can hardly put on a big-city cop drama this fall and somehow evade the subject. The same goes for COVID-19.

In one of the episode’s other storylines, Officer Eddie Janko (Vanessa Ray) tries to help a distraught young woman whose father apparently died in the first wave of the coronavirus in New York.

And now, the office in charge of keeping track of such things cannot locate her father’s remains, and the woman becomes irate. But instead of arresting the woman for disturbing the peace, Officer Janko helps her find her father’s final resting place.

And through it all, neither Officer Janko, the irate young woman nor, come to think of it, anyone else in this episode, is seen wearing a COVID-era mask.

This is an interesting creative choice to make on the part of the writers and producers of “Blue Bloods” -- that they put together a COVID episode that contains none of the visual cues that would place the episode in the pandemic period.

This includes a conspicuous lack of face masks as well as no sign of the outdoor restaurant shelters made of plywood that have gone up on the sidewalks and streets of New York since the pandemic revved up last spring. And since “Blue Bloods” is filmed on location in New York City, the absence of these structures -- which happen to be everywhere -- is a head-scratcher.

Meanwhile, in the episode’s other topical storyline -- Commissioner Reagan’s battle with Whoopi Goldberg -- the Black Lives Matter movement and its protest marches are noticeably absent.

Instead of making any mention of the marches -- and in their earlier stages last spring, the destruction that resulted from them -- the episode chooses to let the debate play out on a local radio talk show.

On the radio show, the City Councilwoman accuses NYPD officers of using nightsticks to disperse a group of African-American street performers, some of whom were seriously injured, allegedly.

This incident is not seen on the show. And as a matter of fact, it is even disproven in a police inquiry. But as a subject of discussion, it disappears from the episode at one point and then is never spoken of again.