Visible Leans On Its Site, Not Media, To Convert 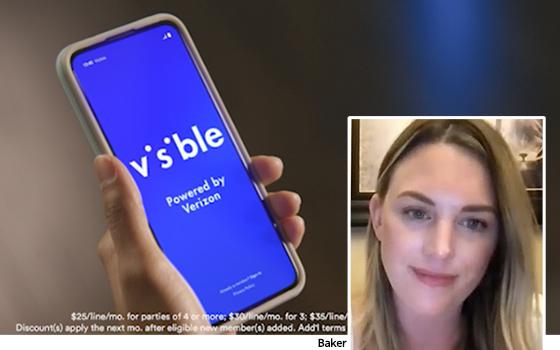 “First party data” was something of a mantra at last week’s Data and Programmatic Insider Summit, as marketers ponder drastic changes in the third-party cookie ecosystem on which data-driven advertising has relied for two decades.

One related theme from the Summit was brands’ greater reliance on their own site dynamics and UX to render more, deeper first-party data. But as we discussed with Visible Wireless’s Digital Marketing and Analytics Team Lead, Sarah Baker, this greater focus on site traffic also changes media buying and creative strategies.

Visible is a Verizon-owned D2C brand in a market dominated by major players. Typically it would optimize media towards performance. But as Baker explained at last week’s Summit, Visible made a deliberate pivot away from that approach to move more of the conversion work to its site and more product-focused marketing rather than media.

MediaPost: Who is the Visible Wireless target?

Sarah Baker: Our target customer is digitally savvy and value-conscious by choice. So these are folks for whom purpose and authenticity matter. They're trying to afford everything and consume everything, and we typically call these folks fast-trackers. So they're about 30 to 40 years old and kind of in this sort of like older millennial, early Gen-X demographic.

MP: Visible plans media around product. One of those products was the eSIM, which lets some iOS users switch providers on their device without waiting for a new SIM card. How do you use that as a marketing fulcrum?

Baker: If you have an eSIM compatible device you can quickly switch your service with a lot of different providers out there. As a disrupter brand, we have to lean into what makes us unique in order to win the market. And in addition, we also have to make sure that we're developing products and offerings that are going to make us stand out in an already established market.

With eSIM, we were able to provide a touchless activation in as little as 15 minutes, and this was really through iOS devices with no additional cost to our consumer. We also see that a lot of other providers in the market aren’t leaning into this. Let's really lean into it. And really, we were able to capitalize on our all digital offerings by doing this.

MP: What media and messaging did you choose for this drive?

Baker: We're looking at around 85 million in terms of the addressable market. With our typical media campaigns, we go a little bit broader with how we target. Our product and our messaging sort of becomes our target, if you will. We're really kind of speaking to the consumer in this way because we're saying switch in under 15 minutes, and get our typical value prop as you would with Visible. 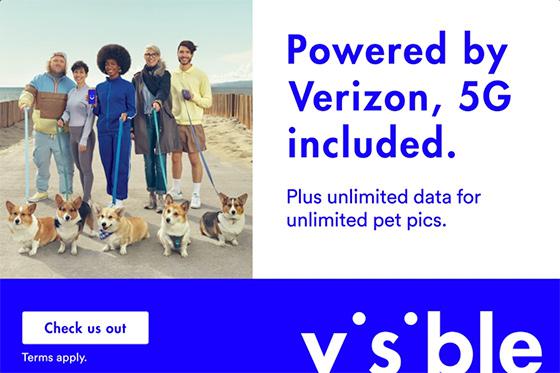 MP: And what are the data-driven media channels that you're using in a campaign like this?

And then, typically, when you're looking at an all-digital offering like this in a product like eSIM and an all digital service, you're really trying to go after them and channels that are digital-first. So that's exactly what we did with eSIM.

MP: I wanted to highlight how and why you pivoted away from optimizing against down-funnel activity and toward driving site traffic.

Baker: So ultimately a decision was made to optimize toward a site visitation goal versus a down-funnel behavior such as your typical add-to-cart or purchase. And, ultimately, we found that for a brand with very low brand awareness in the market going against those well established brands in the space, we found that site traffic was ultimately the main optimization that we needed to make in order to hit on mass-market awareness, establish our brand, [and] build our site traffic large enough to build out a brand acquisition program large enough for future scale.

And with this shift came a pretty important business shift around prioritizing UX and product experience that would not only support the increase in mass-market traffic but also educate on our brand itself. And from there we built a creative experience around brand education and awareness that really would entice users to learn more about our brand by visiting the website. We said paid media is going to serve as a lever to really drive the site traffic, and we're really going to be relying on that UX, not site experience, to convert that user at the end of the day.

MP: Has it also changed the media channels that you choose?

Baker: It really has. We reevaluated our funnel a little bit this year, specifically when we're looking at how we message between each of the channels. You want the messaging to speak to this specific audience that you're going after, i.e. fast trackers. But also you want to have that messaging be a part of a larger brand container ecosystem.

So you're looking at paid social and programmatic display, where we were really going to be able to cast a wide net at a pretty efficient rate in terms of site traffic.

But, ultimately, I think what we ended up finding was that, okay, we can drive the site traffic and these programmatic display and paid social channels in that consideration funnel, but what about the awareness budget? And so we started to quickly chip away at some linear TV in the mix. You start building that larger ecosystem that is going to support our overall site traffic goals and paid media, which is kind of where we're at now.

MP: So let's take a look at one of the spots that we're talking about here.

Baker: This spot was part of our “Wireless that Gets Better with Friends” brand umbrella, and you'll see that kind of trickling down through all of our assets.

But, ultimately, I think what you'll see in the next couple of examples is that the strategy pivoted from having this kind of brand ecosystem in this awareness and consideration funnel, and the only time we ever use our promotions is in our acquisition channels. We want to preserve that brand identity, and that's really important for driving site visitation behavior because you don't want to become a promo brand at the end of the day. So in the next few examples you kind of see that trickle through.

MP: So if you're not optimizing to down-funnel behaviors, how has the strategy impacted that bottom line?

Baker: It's something that we really actively track and monitor. We found that as our brand awareness in the market grew, we found that we were able to increase our subscriber base and our growth at the end of the day. So our goals actually just became more aggressive. By achieving that mass-market awareness and slowly chipping away at that, over time you are able to grow those acquisition channels.

Baker: Definitely. I think a probable common problem to have here among this group -- and probably it may seem like marketing 101 -- but I think a lot of work has been done, at least internally, to curate content on our website that is going to align to the brand container. It's sort of this relentless focus that we started to have on building that brand container throughout all of our messaging and thus the site.

Much change has been made, at least on the site side, to develop landing pages that are going to better build out the product first-messaging that we have, along with brand awareness. So making sure that our product pages are also educating on Visible as a brand, and using them for media pages. That alignment internally has been really key to changing the way we optimize our paid media channels.

MP: What have you learned? Anything new about customer conversion process since you're putting so much weight on a website where you are able to monitor and look at behaviors that closely?

Baker: We do a lot of monitoring. I would say listening to your social channels is really important, and knowing what members [focus] more on. Specifically looking at something like eSIM, monitoring social channels to figure out where is the conversation happening, what are the pain points.

We're constantly evolving that experience. So, for example, eSIM happens within our app, so you have to actually convert through the Visible app when you're downloading this eSIM product. And we actually had a lot of product feedback and spent a lot of hours kind of digesting that experience internally to really refine that to what consumers wanted, to make it as easy as possible.

MP: So what are the downsides of focusing so much on the site to convert? Things like team communication, media location allocation, there's going to be a downside to choosing this path.

Baker: Definitely. I would say probably the first, as you as you kind of mentioned, you're really relying on your engineering and site teams to do a lot of the heavy lifting here. So you're saying, Okay, we have a new landing page that's going to be released tonight, we need all elements of this new landing page to be operating at its fullest functionality and capacity when we have this media launch.

So really, that reliance on engineering and that trust needs to be built, and needs to be there and really strong in order to make that happen.

And then last, I would say traditional media investment is a tough sell because you're relying on a certain number of site visits and that sort of quantity in that shared volume to drive that brand awareness and consideration versus traditional branding measures, so it takes a little bit more education and a lot of internal conversations to get there.