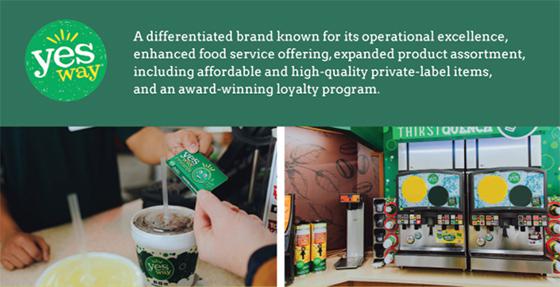 Why build new gas station-equipped convenience stores from scratch when you can raze, rebuild or remodel existing ones and then rebrand them?

That strategy has helped Yesway Inc. become one of the fastest-growing C-stores in the country, according to an initial public stock offering the company filed on Tuesday.

The company plans to raise at least $100 million to fund expansion beyond its 403-store roster in nine Midwest and Southwest States, while extending its food-service platform and introducing smaller locations on or near college campuses.

Yesway Inc. was formed in 2015 by private equity investors. In 2019, it acquired 60-year-old C-store brand Allsup’s, which has 302 locations. At the same time, the company created a portfolio of Yesway branded stores that currently number 101 locations.

With many of its stores situated in rural and suburban markets, Allsup’s and Yesway “often are the convenience retail destination of choice and effectively the local grocer,” the IPO document notes.

The Yesway stores derive mainly from the acquisition and rebranding of existing C-stores.

To generate awareness and entice people to patronize stores during the reconstruction and grand reopening phases, Yesway typically uses local advertising media, including local radio stations broadcasting live from one or more of the chain’s stores.

Known for being the first company to introduce self-serve gas pumps, a mainstay of Allsup’s is its food-service platform, which will be rolled out across Yesway stores, according to the IPO document.

Given the impact of Covid-19, Yesway boasts that it is “insulated from ecommerce” because C-stores provide “a number of important items that cannot be easily delivered on an on-demand basis.” Those items include hot coffee, lottery tickets, tobacco products, alcohol, hot food and fountain drinks.

Also in the works is the Allsup’s Express concept. It would consist of smaller-footprint convenience stores on or adjacent to college campuses “where there is a captive audience of residential students.”