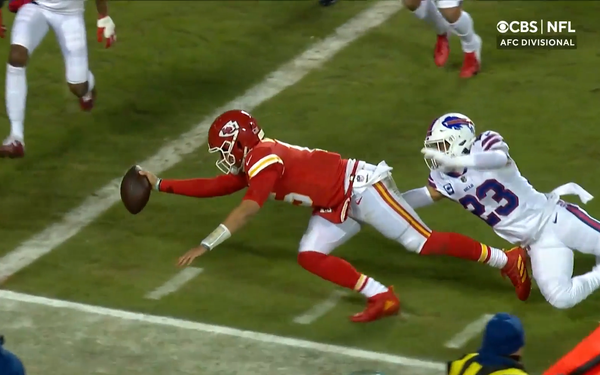 CBS Television Network’s super-close, end-to-end Sunday game -- in which the Kansas City Chiefs beat the Buffalo Bills in the last moments of the contest -- grew 18% to a massive 42.7 million viewers versus a similar game a year ago.

CBS says it was the highest-rated divisional playoff game on any network in five years. Results here include Nielsen viewership data for linear TV, as well as on its ViacomCBS’ Paramount+ streaming platform.

While CBS said the game on Paramount+ was the most streamed non-Super Bowl game of all time, it did not offer any viewership details.

In Fox Television Network’s Saturday game, the San Francisco 49ers edged the Green Bay Packers -- with the outcome also decided in the final seconds. It was 36% higher over last year's NFC divisional game, drawing 36.9 million viewers, according to the company.

CBS’ other AFC divisional game on Saturday, with the Cincinnati Bengals topping the Tennessee Titans, was 13% higher than a year ago to 30.8 million viewers.

The first two weeks of the NFL postseason -- wildcard and divisional rounds -- tallied an estimated $1.2 billion in national TV advertising from 5,568 airings, according to iSpot.tv. This is up from $970.4 million a year ago on 4,222 airings.