Chewy Knows You Know What Your Pet Is Thinking 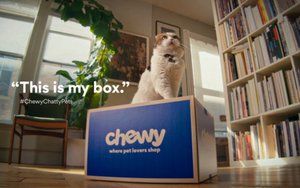 If you’re the kind of pet owner who’s convinced you can read your furry pal’s mind -- in other words, all pet owners -- Chewy’s new ad campaign is designed for you.

Themed “Chatty Pets,” the new effort features a cat, some dogs and a pair of bunnies hoping to master impulse control. Created by 72andSunny, the spots include 30-, 15- and six-second versions and are running on linear and connected TV and digital audio platforms. The campaign is also appearing on YouTube, Instagram, Facebook, and TikTok.

The effort grew out of a TikTok activation launched last year -- #ChewyChattyPets -- that invited people to post a video of their pet, along with captions describing what they’re thinking.

The new campaign comes as Chewy continues to gain as a favorite brand of animal lovers. In its most recent quarterly results, its net sales jumped 24.1% to $2.2 billion. And viewed as a two-year stack, revenues gained 86%.

“Our sustained growth this year shows the soundness of our growth strategy, the uniqueness of Chewy’s value proposition, and the durability of the pet category,” said Sumit Singh, chief executive officer, in that announcement.

Still, the brand also posted a net loss of $32.2 million, the same as its losses in the year-earlier period. It attributed losses to ongoing supply chain disruptions, labor shortages, and higher inflation.

Seth Basham, an analyst who follows the company for Wedbush Securities, estimates its costs for adding new customers jumped 20%. “Nonetheless, Chewy is satisfied with a longer payback period on advertising spending and will continue to add customers at current levels,” he writes.