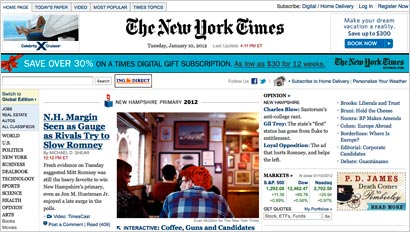 Tablet makers and publishers are locked in a symbiotic embrace, with both sides looking to the other to help bolster demand for their product.

In the latest such partnership, Barnes & Noble has joined forces with The New York Times for a limited-time offer. Customers who buy a digital subscription to The New York Times on Nook can get a free Nook Simple Touch or a Nook Color for the reduced price of $99 -- down from the normal sale price of $199.

B&N customers can take advantage of the special promotion at one of the chain’s 700 bookstores or online at www.nook.com/nyt; the offer lasts until March 9, 2012. It is also available to attendees at this week’s Consumer Electronics Show in Las Vegas.

In 2010, Hearst Corp. invested in Skiff, a company founded to create both hardware and software for consuming content across a variety of devices, which was later bought by News Corp.

In April 2011, Amazon announced that it would sell a discounted version of its Kindle, offsetting the lower price by showing digital ads on the device.