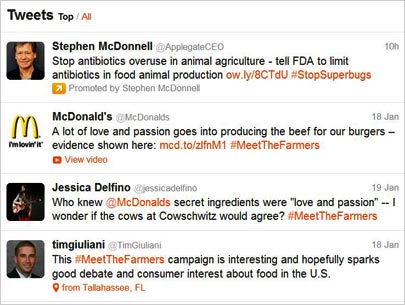 It all started innocently enough. McDonald's was trying to promote its connections with family farms and local suppliers. In tandem with a TV campaign, the company acquired two promoted tweet spots from Twitter -- the #meetthefarmers and #McDStories. “The goal of the campaign we have launched, as online and on TV, was to tell people about where our food comes from,” says McDonald's Social Media Director Rick Wion. They were leveraging Twitter to broaden the reach of the effort.

“We started with an unbranded hashtag of #meetthefarmers and got really positive engagement.” In fact, the tweet had the unintended benefit of inspiring other McDonald’s farmers to speak up over Twitter and claim they too supply the company. Things started going sour, however, after the marketers swapped out #meetthefarmers for #McDStories and the promoted Tweet "When u make something w/pride, people can taste it.’ –McD potato supplier… .”

As Wion recounts it, the marketing group was monitoring the Tweet’s progress in real-time as things went from not-so-good to worse. McDonald's critics started piling on with negative stories, accusations of bad quality, and more than a few vegetarian warnings against meat altogether. Within two hours of the #McDStories tweet going up the company had pulled it down, replacing it with the original #meetthefarmers tweet. Wion says that the “conversation died down” by the end of the afternoon that day, although neither tweet seems to be faring well for the brand even now.

As late as yesterday, Jan. 23, both hashtags were attracting calls to halt antibiotics in foods and links to videos regarding poor treatment of livestock.

Wion admits that the attempt misfired on McDonald's and says that at its height the McDStories hashtag generated about 1600 tweets. But he says the incident needs to be put into the larger perspective of McDonald’s ongoing social media conversations. “We get thousands and thousands of Tweets about McDonald's every day. This did go in a trend we didn’t want and didn’t anticipate. But it is not on the level of the general chatter that is out there about us each and every day.”

Wion says that promoted Tweets do work especially well with new product announcements. But a great deal of attention always must be given to the ways in which both the hashtags and the message itself are constructed. “We have done this for every promoted trend,” he says. "We keep a very close eye and we are thinking very carefully through what phrasing we use in the tweets but also in the trend itself. You have a very short phrase to engage folks. We need to continually think through not only how to be creative and engaging, but how are people going to react.”

You can’t control how people will respond to corporate messaging in social channels, he says, but you can try to construct messaging that can’t be easily hijacked. “We want to make sure we put them in a way so that fans can take it in a positive way and deflect or not create such an open door for detractors to take it in another direction.”

Wion says McDonald's will continue to use Twitter and promoted tweets and trends channels for messaging. He says this incident did not migrate to the other social channels on which the brand is involved, such as Facebook. where McDonald's has 13.6 million Likes. “Typically, the things that go on Twitter stay on Twitter,” he says.

Well, except for the things that get picked up by media outlets, that is.