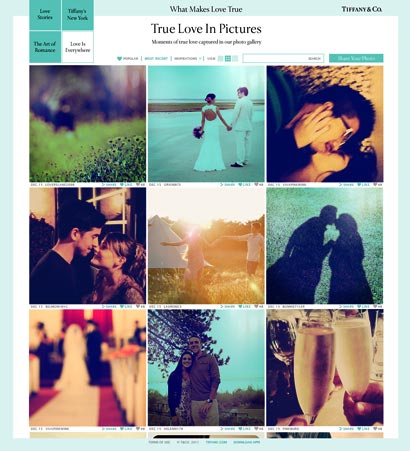 As the nation’s jewelers gear up for Valentine’s Day, Tiffany is encouraging even lovers with empty pockets to join the action, expanding its What Makes Love True website to include a new photo gallery. It allows couples to upload photos via computer or an iPhone app. And the chain is also hosting photo booths in its New York flagship, two London locations, and in its Ginza store in Tokyo, which will reward couples with a 4 x 6 print.

The site expansion also includes a gallery of images shot by Scott Schuman of “The Sartorialist” and photo-blogger Garance Doré, who are also a couple. Users can tint their photos in black and white, peach, or Tiffany Blue, and include their own caption. The company says it plans to update the site throughout the day.

Tiffany says the expansion is due to the positive response people have had to the whatmakeslovetrue.com site, launched back in June. The launch included an original short film, “Will you marry me?” by actor/filmmaker Edward Burns, as well as an exclusive version of singer-songwriter Josh Radin’s arrangement of the classic hit, “You’re the First, the Last, My Everything,” and links to more romantic songs and movies (many set in New York) via iTunes.

And a map feature allows users to tag (with a heart, of course) any spot in New York City that they think is especially romantic. “Adding personal portraits to the images of the many couples we’ve interviewed is a natural progression,” Tiffany CMO Caroline Naggiar says in its release.

Tiffany is feeling some pressure, after reporting a relatively disappointing holiday period.

"After achieving very strong and better-than-expected sales and earnings growth in the first three quarters of 2011, sales weakened markedly in the United States and Europe during the holiday season, reflecting restrained spending by consumers for fine jewelry,” its CEO Michael J. Kowalski said in a recent statement.

And while some observers are predicting a happier Valentine’s Day (IBISWorld is forecasting a 5% increase in overall spending related to the Feb. 14 holiday), Jewelers of America is going with a more subdued estimate, expecting jewelry sales, which came in at about $69 billion in 2011, to grow between 3.5 and 4% this year.

“V-day is the second-biggest calendar event for specialty jewelers,” explains a spokesperson for Jewelers of America, “with the holiday selling period bringing about 30% of specialty jeweler sales, and Valentine’s Day sales only about 8% of their yearly sales, or 13% if you include January purchases, which may relate to the upcoming event.”