Chevrolet Gets Common Cause With Commonwealth 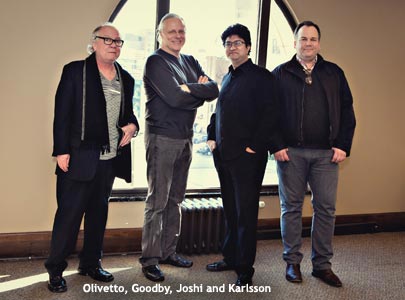 Chevrolet is hoping to create a lot of efficiencies and build a lot of bridges -- both over physical distances, and between big media holding companies -- with its decision to give Chevrolet global advertising oversight to a newly formed agency, Commonwealth.

Commonwealth, as the name suggests, is an agency by treaty between an Omnicom agency, San Francisco-based Goodby, Silverstein & Partners, and an Interpublic shop, New York-based McCann Erickson Worldwide.

This agency appointment combined with the recent selection of Carat as GM’s agency for its media planning and buying operations is also intended to align with the corporation's efforts to trim the fat, partly by eliminating redundancy. As global CMO Joel Ewanick explains, global oversight from an advisory board whose membership includes Jeff Goodby, Washington Olivetto (CCO of McCann Worldgroup in Latin America); Linus Karlsson (CCO McCann Erickson in New York and London), and Prasoon Joshi (CEO, McCann Worldgroup, India) means good work from an agency in, say, Colombia, can be applied to other markets, where appropriate. That wasn't done in the past because each market and agency had its own moat and castle creatively.

“These agency consolidations are expected to create about $2 billion in savings over the next five years, with a portion used to take advantage of key global marketing opportunities and strengthen the focus on our global Chevrolet brand, and a portion hitting the bottom line,” Ewanick said, adding that one of the first tasks for Commonwealth will be dealing with whether or not to keep Chevrolet's "Chevy Runs Deep" theme.

"No decision has been made, but we will look at whether we need it. If you look at it there is traction with Chevy runs deep in many countries around the world. It’s open to discussion. We hope to have that done by this summer," he said. "We are seeing lots of redundancy, this will allow us to collectively look at the way to go to market under common, consistent theme."

The company says creative assignments will be handled through global hubs, which will operate in Detroit, Milan, Mumbai and Sao Paulo.

Jeff Goodby, who is CCO at the San Francisco agency, said that the kind of global agency that crosses holding companies simply couldn't have happened a few years ago because the degree of global communication required is technology driven. "I do think Joel is right when he says it’s all about people. I know all these guys; I've worked with them for years. It’s a real natural fit and technology like Google+ make it work. The way we can travel and communicate now makes it a more viable solution than years ago. The connections can stay tight and we can share information more quickly and with greater fluidity than ever before. People have tried to make global brands in the past and we can do it now."

Until now, Goodby, Silverstein & Partners has led the Chevrolet creative account in the United States -- the brand’s largest market -- while McCann Worldwide has been Chevrolet’s agency of record in many global markets, including Mexico, Canada, Brazil, India, Japan, China and Latin America.

Nick Brien, chairman and CEO of McCann Worldgroup, said Ewanick's challenge was creating a new model that would be a disruptive challenge to the orthodoxy of the status quo: 70 different agencies across the world doing their own thing on behalf of Chevrolet in their own markets. "[Commonwealth will be] a single-minded team and it demands that two competitive holding companies create and work together for the best interests of the brand. Now, with the global partnership…there lies the opportunity to drive efficiency, to really enhance marketing communications."