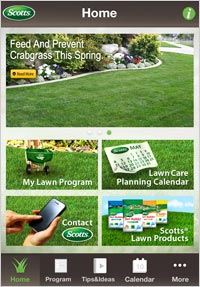 The program has roots in a Scotts executive appreciating the lawn care company’s email marketing program. Working in the South, the marketing executive found that as more people signed up to receive messages -– which came under a “My Turf Tips” umbrella -- sales increased.

However, the executive overseeing Scotts South wanted to move closer to the aisles at Lowe’s or Home Depot. With the permission of retailers, an initiative was launched allowing the store reps to sign people up.

Using resources of multiple departments, Scotts created an app for iPhones and iPads that opened to a mobile Web page, allowing for the sign-ups. The company would later follow up with a customized email to the newly added consumer.

Close to 20,000 email addresses were collected with the program. Edwardson detailed the initiative in his keynote address at the MediaPost Email Insider Summit on Thursday.

Edwardson expanded further on ways that Scotts looks at the consumer perspective when considering email strategy. Factors it considers are whether a recipient feels the content is sufficiently personalized, does it increase lawn care knowledge and provide helpful hints, and is it easy to understand.

The “My Turf Tips” tool is an effort to simplify email messaging after reviewing some unfavorable data.

Scotts has also been active in establishing customer relationships via Facebook. But Edwardson said it is key to ensure customers find value in interacting with Scotts on the platform, and perception of the “s” word must be avoided.

“It’s entertaining,” Edwardson said. “Facebook users welcome marketers, but they fear it may turn into spam … so you have to be interesting.”

Beyond content itself, Scotts looks to ensure that Facebook users feel the brand isn’t just engaging in push marketing, but responding to customers. It also wants to seed a platform where people feel they can express themselves.

Scotts’ deep relationship with Major League Baseball has helped boost Facebook “likes” by huge numbers. For example, on opening day this year, a sign behind the batter on an ESPN game directed viewers to the Scotts page. The company also used FarmVille with its Miracle-Gro brand to capitalize on Facebook.

One social media outlet it has not used as a would-be direct marketing vehicle is Twitter. Oversight there falls under the customer service department, which uses it as a way to communicate with customers, largely to answer complaints and questions. Edwardson said that often results in a response call or email.