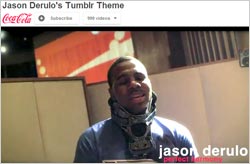 Coca-Cola is partnering with “A-listers” to launch the first-ever celebrity-designed themes for Tumblr, in the brand’s latest outreach to the teen audience.

Singer Jason Derulo is the first of five celebrities to create customized themes that teens can install on their own Tumblr pages.

Each celebrity worked directly with Coca-Cola North America and digital agency 360i to provide input on their themes, including design elements and content. 360i handles social strategy and community management for Coca-Cola.

Derulo’s theme, which will debut on May 24, is based on a feather and music notes from one of his tattoos, and relates to his new song “Undefeated.”

Derulo performed the song on May 22 on the first of the two-night season finale of “American Idol,” as part of the Coca-Cola Perfect Harmony program, which encourages songwriters to work with artists to create a new song performed on the show.

Coca-Cola launched its teen-targeted Tumblr "Happiness Is" presence last December, making it one of the first CPG brands to test the waters in the space.

The “Happiness Is” Tumblr page features upbeat, entertaining original content from Coke, such as photos, videos, gifts and past ads, along with content from the Tumblr community.