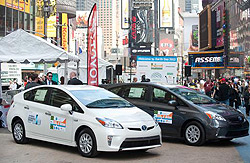 Toyota is still number one, if not in sales (GM took that title for full-year 2011). The automaker has gotten the nod as the "greenest" company in Interbrand's 2012 Best Global Green Brands report. Second place goes to Johnson & Johnson, and third to Honda.

There was a time when such a ranking would be marginal news in the marketing suite, but no longer. How green a company is, or how green consumers think it is, has become a serious driver for purchase consideration.

But Jez Frampton, CEO of the London-based firm, points out that a strong sustainability track record by itself is like the sound of a tree falling in an empty forest: silent. “Sustainability has proven to be a strategic and profitable aspect of business and a brand-strengthening asset,” he says in a statement. “It is crucial that consumers’ impressions of a brand are in close alignment with that brand’s actual environmental performance. Otherwise, a brand’s efforts in this area could serve as an under-utilized asset, or, conversely, suffer due to accusations of ‘greenwashing.’”

To make the top 50 Best Global Green Brands, companies have to do well in both sustainability performance and perception. Brands are measured against two sets of criteria: Organizations must demonstrate that they source, produce, and distribute products and services in an environmentally responsible manner; and they must work to build value among key audiences by credibly conveying the benefits of their environmental practices.

The 2012 ranking is dominated by automotive and technology brands. For Toyota, which was number one in the study last year too, the expansion of its Prius portfolio of vehicles and its zero-landfill status at all of its North American manufacturing plants helped.

Interbrand says a record eight automotive brands are in this year’s Best Global Green Brands ranking, with four brands ranking in the top 10. In addition to Toyota and Honda are Volkswagen at number four, BMW at ten, and Ford at 15. Mercedes-Benz is just behind Ford and Hyundai is in 17th place. Nissan, a new entrant, is in 21st place.

In tech, Panasonic jumped four spots to #6 in the Best Global Green Brands ranking this year. The company is converting a factory site in Fujisawa near Tokyo into a “Sustainable Smart Town,” scheduled to be in operation in 2014.

Newcomer Nissan is on the list now because of its moves to reduce its carbon footprint worldwide with a new six-year environmental action plan called the Nissan Green Program, notes the report. The company has also raised green perception because of its R&D on an EV quick charger and pilot programs aimed at making cities EV ready.

The brands that saw the biggest jumps in ranking include Danone, now at ninth place because it has been adamant about reducing its carbon footprint by 30% by the end of 2012. Interbrand says it it has already reduced it by 27.5%. Danone last year co-created the “Livelihoods Fund.” Ford saw gains in environmental performance around its operations, and because of its transparency and disclosure on its activities and its environmental impact. Starbucks at 36 and UPS at 43 improved their overall ranking the most, both moving up six spots from where they ranked in the 2011 Best Global Green Brands report.