Beyond Lulz: Social Grows Up 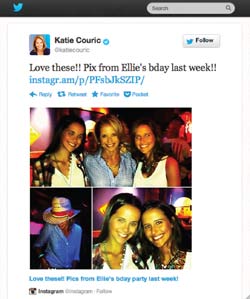 Between mobile, shopper marketing and consumer acceptance, the growth of social is about to hit warp speed

My contentious relationship with social media is made worse when I’m reminded that it’s only in its infancy. You see, I love Facebook, Twitter, Pinterest, even Foursquare. I peruse my social media feeds every morning before I even think about opening a tab for hard news. I know about my middle school classmate’s new baby, that my favorite store is having a sale, that the UN is in recess for the week, my favorite celebrity couple is having marital problems and that unemployment continues to rise across the nation. It’s exhausting. It’s exhilarating.

But as a media professional, or at least someone who pretends to be one for a living, I pause and wonder, “where the hell is all this going, and when will it get there?”

Adam Kmiec, director, global digital marketing and social media at Campbell Soup promises change is coming soon. “What we’ll see over the next four years will be like nothing before it,” he says. “Digital is finally going to grow up.”

“We’re going to see an unprecedented level of maturity and sophistication in the space, with much of it coming through the continuing consolidation and acquisition of social media startups,” Kmiec says. That doesn’t mean the proverbial lulz are letting up anytime soon, but perhaps they will grow stronger and maybe require a shave, because with its maturity comes a need for rich, meaningful content.

“Without a doubt, in the next few years, content creation will be the foundation of social media,” says Persia Tatar, founder, Social Media Society. “Brands and marketers will need to shift their focus from generating followers, which will still be important, to creating a rich, meaningful experience for consumers.”

Kmiec agrees, noting that the content creators and consumers will soon be one and the same: “With mobile and an ever increasingly connected world, we will see everyone become a publisher of content, not just a consumer of it.”
What does it mean for marketers? “This will bring about a need to be faster in how we satisfy the demand for rich content and how we convert all those tweets, likes, comments, posts, photos, et cetera into meaningful insights,” says Kmiec.

Aside from shifting to quality content creation, social media will also be a catalyst in rebranding tiny startups all the way to big-time celebrities. In fact, it’s already happening.

Take Katie Couric, for instance. Long known as the cheery morning anchor for nbc’s Today Show, she transformed her image to the more serious, unbiased and stoic journalist when she took the late shift.  It was a while before anyone recognized her as such. But that was before social had a seat at the rodeo. Now, people can rebrand themselves anytime they get — or want — a new gig.  Which is what Couric is doing to prep for her latest transition to talk show host.

Couric has leveraged Twitter to her advantage in the campaign to redefine “Katie.” The woman who famously goaded 2008 Vice Presidential nominee Sarah Palin into waxing prosaic about her state’s proximity to Russia, thereby effectively sealing a Democratic victory, doesn’t hold on to past accomplishments when describing herself now. Her Twitter bio is simple: Single mom and soon-to-be talk show host. Decidedly more relatable than “changer of American politics, schmoozer of celebrities and gazillionaire,” right?

“Couric is now tweeting pictures of her daughter’s birthday party,” notes Marcy Q. Samet, evp, managing director, mrm, a New York-based top digital global agency. “Why? You need to get to know ‘Katie’ in your living room in the afternoon vs. Katie Couric anchoring the evening news. Social media is redefining her brand.”

But social itself continues to transform. It’s not just a social space, but a social marketplace. Steve Minichini, president, interactive marketing, TargetCast tcm, a New York-based independent media agency, promises that shopping will grow organically from existing platforms and is the next frontier for social.
“Consider what happened with Pinterest,” he says, “and how quickly it picked up, and how Tumblr and WordPress have done a nice job of really carving out their area of a social marketplace and how that gives consumers a voice.
Where I see it really heading and expanding has a lot to do with shopper marketing more than anything else. Mobile and smartphones are heavily utilized but the technology hasn’t expanded to where you’ve seen it explode in other parts of the world — there is a lot of buzz around m-commerce — how that connects with Twitter and Facebook and other geolocating in-store apps.” The technology is there and will be utilized in the future. When that happens, social shopping will really take hold.

In fact, you know it’s big when even Walmart wants to play. The world’s largest retailer recently offered its first-ever Pinterest contest, offering $500 gift cards to winners who showcased Walmart products that help them live a greener life.

“As consumers use their phones more to pay for products, they are going to connect more for referral services in the social space — ‘yes, I bought this product and loved it’ — and have this close in-group that would validate a purchase and recommendation.”

“There are so many options for everything you want to buy that you have this paradox of choice,” says Tatar. “Social shopping really helps break down that barrier with product recommendations and that is only going to grow in the coming years.”

There is always risk, though, especially with saturating the market.

Minichini reminds us of the failure of the daily deal concept, bringing to mind Groupon’s epic ipo flop, “Look at LivingSocial and Groupon and how fast they’ve fallen off dramatically. That has a lot to do with social sharing, almost crowd sourcing. Both were lightning hot last year and now it’s really a much different scenario for both of them. The one-and-done offer became too saturated and they need to do quite a bit to redefine their offering to get themselves credible and hot again.”

In a time where tech evolves faster than we do, it’s hard to tell if a social brand can even rebound from a devastating blow like that. When an image is damaged and consumers flee, do they ever return? It’s hard to say, but there is precedent for complete brand regeneration, but it’s not always successful. Does anyone remember Myspace?

Minchini says, “Nothing lasts forever. If you think about what Myspace was at one point and what it became and now how it’s reemerging, that’s a true testament to how fickle consumer interest can be. But it’s really tough for me to think about Facebook going away. Redefining itself, sure, every business model does.”

Though it’s hard to predict consumer interest, social media makes it easier for marketers to predict consumers’ behaviors. In March, sas and United Nations Global Pulse released results from a joint study where they analyzed two years worth of social media data from the u.s. and Ireland to get a sense of how people were coping with unemployment.

According to the study, “increased chatter about cutting back on groceries, increasing use of public transportation and downgrading one’s automobile could, indeed, predict an unemployment spike.”

Why should marketers care about a study involving social media and unemployment mood? Marketers and brands need to realize that while it’s important to recognize and learn the personal behaviors of social media users, the key to winning the future of social is knowing that those behaviors tell the collective story of consumers.

Kmiec sees a tough task ahead: “As marketers we’ll need to learn how to run a marathon at the pace of a sprinter.”

social media
1 comment about "Beyond Lulz: Social Grows Up".
Check to receive email when comments are posted.
Next story loading