Tim Cook Points To An Apple TV, Admits 'We Screwed Up' On Maps 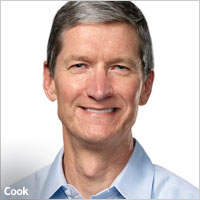 Apple CEO Tim Cook pretty much confirmed that Apple is working on a TV in an interview with NBC’s Brian Williams to air tonight on the network’s "Rock Center" news program. When asked what is next for his company, Cook said: “When I go into my living room and turn on the TV, I feel like I have gone backwards in time by 20 to 30 years.”  “It's an area of intense interest. I can’t say more than that.”

Speculation about an Apple television play of some kind was fueled a year ago by Walter Isaacson's biography of the late Steve Jobs when Jobs revealed his intention to enter the TV space and create a better interface and experience for the last century’s great medium.

Analysts have had a field day projecting what an Apple television would be and when it would hit the market. In one popular scenario Apple actually makes a full TV under its own brand. But other ideas include expanding its current Apple TV set-top box to become a richer interface for all TV inputs. As a company Apple has been famously controlled about the timing of information leaks and foreshadowing unannounced products. That Cook even would discuss a TV-like product at all suggests that it may be formally announced in the next year. Many analysts peg an Apple television for the holiday 2013 cycle.

According to multiple reports, Apple has been trying to negotiate with media companies on terms for a new a la carte model of selling and distributing TV content. Such a move would do for TV what Apple did to the music industry by separating the content from its traditional distribution and sales models.

Cook also admitted to Williams that the infamously flawed mapping application introduced in iOS 6 was a mistake.  The intention was to provide customers with features the current Google-powered maps did not have. “However, I can tell you, so we screwed up.” He added: “We screwed up and we are putting the weight of the company behind correcting it.”

apple, mobile, tv
2 comments about "Tim Cook Points To An Apple TV, Admits 'We Screwed Up' On Maps".
Check to receive email when comments are posted.
Read more comments >
Next story loading