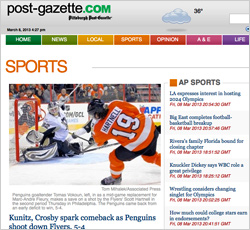 That compares with 66% for ESPN.com, 46% for league sites, 45% for Yahoo Sports.com, and 45% for ESPN Sports Center. Further down the list, 33% said sports talk radio and 23% said Sports Illustrated or SI.com.

The finds are from a survey by M/A/R/C for the Newspaper National Network. The poll of 716 men ages 18-54, including in-depth interviews with 404, found that this key audience demo prefers both print and online newspapers to any other source for sports content.

Overall, 75% of non-regular readers cited newspaper Web sites as a go-to source, compared to 71% for ESPN.com, 40% for Yahoo Sports.com, and 38% for ESPN Sports Center. Sports talk radio trailed at 27%, and Sports Illustrated and SI.com came in at 16% and 13% among non-regular readers.

Newspapers’ advantage was qualitative as well. Among regular readers, 72% said sports content from newspapers was superior to any other source, and 62% said they get news and analysis they can’t find anywhere else.

In addition, 88% of regular readers said reading sports coverage in newspapers is relaxing, and 79% said it’s an important part of their regular routine. Interestingly, regular newspaper readers were also more likely to characterize themselves as avid sports fans, with 72% self-identifying this way, compared to just 45% of non-regular readers.