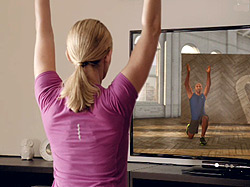 Although gaming remains the most dominant activity on gaming consoles, the share of watching digital video usage is climbing for online and in listening to music.

Nielsen says consumers with consoles such as PlayStation 3, Wii, and Xbox 360 spent 22% of their overall time in 2012 watching video from video-on-demand services and video streaming platforms. This is up from 19% in 2011 and 13% in 2010.

In particular, Nielsen says PlayStation 3 users drove much of this trend -- spending nearly 25% of their console time with video streaming content, up from 15% in 2011. By comparison, Xbox 360 users spent the same levels of console time -- 13% -- in 2012 versus the previous year.

In online gaming, however, activity continues to climb -- albeit slowly. Xbox 360 users are at the highest share levels in this category of all gaming console platforms ---  33% of those users overall time, the same versus a year ago. PS3 users are now at 18, up a bit against 16% in 2011. Wii users are now higher to 11% versus 8%.

Nielsen says the survey came from more than 2,500 U.S. general population consumers (including game console users) from October 2011 and October 2012.