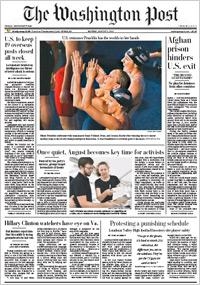 In the third and arguably most significant print media company sale in as many days, Amazon founder Jeff Bezos on Monday agreed to acquire The Washington Post Co.'s publishing division, including flagship newspaper The Washington Post, for $250 million.

The news follows two other print media company sales over the weekend: Boston Red Sox owner Fenway Sports Group's acquisition of the New York Times Co.'s New England Media Group, including The Boston Globe; and International Business Times owner IBT Media's acquisition of Newsweek from IAC.
The Washington Post Co. said Bezos is acquiring the company in his "individual capacity" and that it will not be part of Amazon.

“I understand the critical role the Post plays in Washington, D.C. and our nation, and the Post’s values will not change,” Bezos stated. “Our duty to readers will continue to be the heart of the Post, and I am very optimistic about the future.”

He said he asked Katharine Weymouth, CEO and publisher of The Washington Post; Stephen P. Hills, president and General Manager; Martin Baron, executive editor; and Fred Hiatt, editor of the Editorial Page, to continue in those roles.

Slate magazine, TheRoot.com and Foreign Policy are not part of the transaction and will remain with The Washington Post Company, as will the WaPo Labs and SocialCode businesses, the company’s interest in Classified Ventures and certain real-estate assets, including the headquarters building in downtown Washington, D.C. The Washington Post Company -- which also owns Kaplan, Post–Newsweek Stations and Cable ONE -- will be changing its name in connection with the transaction; no new name has yet been announced.

The purchase price is $250 million, subject to normal working capital adjustments, and payable at closing later this year.