Look Who Got Schooled

SAO PAULO – The feared revolucionária is just so totally adorable.

Isadora Faber -- the Facebook terror of Florianopolis, Santa Catarina -- is so shy she speaks with her eyes cast downward and her slender hands clamped between her knees. Student of grammar and arithmetic, wearer of skinny jeans and Chuck Taylor All-Stars, hugger of pet dogs, this 14-year-old blade of grass with chestnut bangs and a pinched, bashful smile has brought her city's school system to its knees.

She was lightly armed. To prevail against the forces of indifference and corruption, Isadora had only a cell phone, a computer and seven year's supply of righteous indignation from having endured the ongoing insult that is Brazilian public education. Her school, Maria Tomázia Coelho, was a shambles. “The doors were broken,” Isadora says. “The paint was peeling. There were no textbooks. No homework. No discipline. The teachers told us they were going to earn their salaries whether they teach or don't teach. My parents complained, but the school did nothing. They said, ‘That's just the way it is. It's out of our control.’”

And the kid was just fed up. One day in 2012, just before winter vacation, she opened a Facebook page titled Diario de Classe and posted a cell-phone photo of the school's graffiti-covered front door. “The problems of the school start here,” she wrote. The same day she posted a picture of the girl's bathroom door, which was scarred and missing its latch. The pictures generated some comment among her classmates. So when she returned from the break, she resumed documenting the shortcomings of Maria Tomázia Coelho, such as the inedible lunches, ceiling-less gymnasium and pupils milling around the classroom in the middle of what was supposed to be instruction.

Naturally, the administration leapt into action…by summoning Isadora's parents to school and demanding they shut their kid up.

So naturally the administration changed its approach…by going to the police and lodging a criminal defamation complaint.  Meanwhile, the handful of comments and Likes was growing into hundreds of comments and Likes. And as word of Diario de Classe spread, other neighborhoods began to pay attention and share horror stories from their own schools. Soon the Likes numbered in the thousands.

So naturally the administration had to stop whining and address the problem at its source.

As Isadora tells it: “The principal and the teachers told other kids to get me to stop. They told them: ‘You are under 18, so if you beat her up nothing can happen to you.’ My parents came to school and brought me home.” Here perhaps entered another, even darker element of hatefulness. The Fabers are gauchos, an ethnic “other” hailing originally from elsewhere in southern Brazil. The incitement took on an ugly but familiar edge. That week, Isadora's family found itself in a barrage of flying rocks launched at them outside their home.

"Last night, had a rain of stones at home, one of them hit my grandmother of 65 years who suffers from a degenerative disease. My parents took the steps and today took my Grandma to do examinations and to the police. There they made tests. Now she is in treatment. Amazing how some people are ignorant, people who do not have a minimum of decency. Some poor guys think they own everything and truth, think they can intimidate us, but won't succeed. My parents are the Gauchos but live here 17 years, have their own home and I was born here. We will not leave our home. Xenophobia is a crime and is already being investigated. Look how was the face of my grandmother ... the one that suffered the consequences of this barbarity."

The accompanying picture showed the gash and bruising on Avo's face. That nasty episode caught the attention of the press, and Isadora overnight became a media darling. The thousands of Likes became tens of thousands and then hundreds of thousands. Naturally, the administration was obliged to answer for itself…and schooled by a child, finally it did. Within two weeks, the municipal education secretary ordered repairs. New doors. New gym. New paint. New bathroom fixtures.

The culture remains a work in progress, but Isadora still attends Maria Tomázia Coelho and says there have been improvements. Teachers were replaced, discipline tightened. Remarkably, the principal kept his job (firing a civil servant in Brazil being a near impossibility.) But the Littlest Whistleblower's grievances, socially mediated and finally mass mediated, triggered a national dialogue about the state of education. The senate (at least so far with its rhetoric) is on the case.

Isadora, meanwhile, remains the reticent (digital) revolutionary, shrinking under the spotlight that comes with 627,000 Likes. When you ask her a question she seems to want to melt into her Chucks and disappear. But she answers the question, which is: “How do you tolerate all the attention on you, good and bad?”

The 14-year-old jams her hands between her knees and looks at the floor, self-conscious in every sense.

“It's worth it,” she replies in a whisper, “to go beyond my dream.” 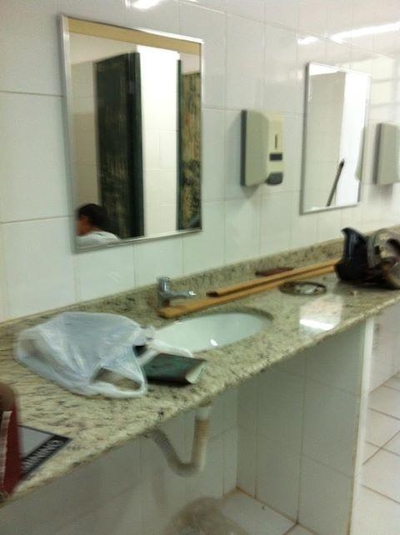