Analyst Warning: WhatsApp Is 'The Anti-Facebook' 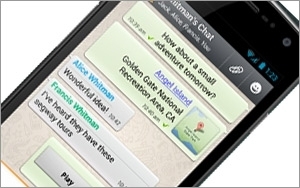 What could you buy with $19 billion? By one analyst’s estimate, two nuclear submarines; 76,000 trips to space on Virgin Galactic; about a third of Ford Motor Company; or the entire Sony Corporation (with change to spare).

For Facebook, $19 million just bought a messaging app with 450 million active mobile users, and a steep growth curve among young consumers and those in emerging markets.

But will the WhatsApp deal pay off? Analysts and industry leaders continue to argue both ways.

The deal was a no-brainer, according to Nathaniel Perez, global head of social at SapientNitro. “Facebook is failing to get a handle on immediacy and spontaneity,” he said. “WhatsApp is incredibly successful at it … and that's why Facebook needs it.”

Yet, among other concerns, Facebook is a fundamentally different company than WhatsApp, according to Debra Aho Williamson, Principal Analyst at eMarketer.

“It’s the anti-Facebook,” Williamson said on Thursday. WhatsApp doesn’t have any advertising, for one, and it doesn’t track users’ data. By contrast, “Facebook has based its business on the back of consumer data,” said Williamson.

Citing revenue concerns, Pivotal Research analyst Brian Wieser downgraded Facebook’s stock from a buy to hold, this week.
To justify its $19 billion price tag, WhatsApp will need to generate about $1 billion in annual cash flow by 2018, by Wieser’s reckoning. “While we see strategic merit, the acquisition is difficult to justify on metrics we use to value Facebook,” he said in a research note.

However, the potential to scale rapidly is more important than a clear revenue model, said Michael Boland, BIA/Kelsey's lead mobile analyst. “WhatsApp could be an effective loss leader to grow Facebook’s global user base,” Boland explained in a note on Wednesday. “User acquisition is vital for a company like Facebook, for which there’s a lock-in effect and a high lifetime customer value.”

“In that light, WhatsApp can be seen as a play at sheer scale … and that needs to happen globally, where Facebook’s user base will underpin its network effect and all future plans as a business.”

Added Boland: “Monetization can then come in all of the other ways Facebook is building its revenue model.”

In a year or two, Facebook could come up with some new ad models that WhatsApp users find palatable, eMarketer’s Williamson said. “They have smart engineers who will find new ways to advertise [on WhatsApp] in a way that makes sense, and [in a way] that feels native,” she said.