The network will support banner ads and interstitial ads with a small amount of code. It will also support native ads, but Deb Liu, director of product management at Facebook, said the native ads would require a little more investment on behalf of app developers when it comes to coding, compared to the banner or interstitial formats.

Liu announced the new network at the F8 Developer Conference in San Francisco. Liu did say that the company was “excited to announce the Audience Network” -- no “Facebook” before it -- although the image behind her had Facebook’s “F” symbol neatly placed in front of the words “Audience Network.” 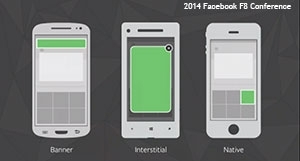 She walked through three examples showing the Facebook Audience Network in action: Target reaching potential movie buyers on The Huffington Post; Coca-Cola creating look-alike audiences and reaching new prospects on a clothing site; and Audible finding "Game of Thrones" fans on the game “Cut the Rope.”

Facebook founder and CEO Mark Zuckerberg took the stage after Liu and shared a few thoughts of his own regarding the new mobile ad network.

“I’m really excited about this audience network,” he said. He noted that in recent years Facebook has been focused on helping developers build and grow their apps, but said the launch of the Facebook Audience Network marks the first time Facebook is helping developers “monetize in a serious way on mobile.” He believes the “mobile ecosystem needs a way to deliver native, personalized ads to people.”

In fact, the fb.me/audience-network page has scant details, as well, and the only reference to the split was the last question on the program's FAQ:What is your revenue share with publishers and developers?

"We believe that the Audience Network provides a mobile advertising experience that will better help publishers and developers monetize their apps, but we cannot commit to a specific revenue share at this point. Real-time reporting and expected payout are available in the "Audience Network" section in your app settings page."

—Joe Mandese contributed to this story.