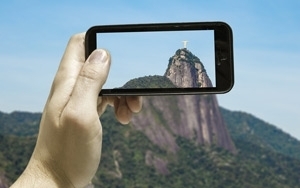 When it comes to mobile advertising, Latin America is still just a tiny fraction of the global market. Figures released by the Interactive Advertising Bureau earlier this month showed that the region accounted for only 0.7% of the $19.3 billion in global mobile ad revenue last year. The $144 million total for Latin America represented a 215% gain from 2012 — faster than other area, but coming off a very small base.

Among the five major regions the IAB analyzed, Latin America’s mobile ad share was the smallest, trailing behind even the Middle East and Africa, which had 1.2%. New data released by Millennial Media today indicates why Latin America is lagging, but also how that translates into potential upside for device makers, and ultimately, mobile advertisers.

For one thing, only an estimated 19% of the region’s population owned smartphones in 2013. But that proportion is expected to increase to 24% this year, and 39% by 2017. Smartphone adoption, in turn, will help to fuel mobile ad growth as it has in the U.S. The eMarketer forecast projects 73% growth, on average, from 2014 to 2017.

Apart from the numbers, Angela Steele, CEO of mobile-focused agency Ansible, pointed out that region is already producing top-quality work. An FCB Brasil campaign for Nivea that turned an ad into a wearable device for children won the top prize in the mobile category at the Cannes Lions in June, where Steele served on the Mobile jury.

“From a business standpoint, I’d say Latin America is certainly on the radar for agencies -- not only for their role as a growth market for advertising consumption, but also for their strategic importance as it relates to creative and content production,” she said.

Through hosting the World Cup this year and the 2016 Summer Olympics, Brazil in particular is expected to see a rise in digital spending across the desktop and mobile in the coming years, with the total to reach $2.9 billion in 2014, according to eMarketer.

Starting from a smaller base, however, Argentina is projected to have the fastest mobile ad growth in the next few years, at 119%, followed by Brazil (88%), and Mexico, (66%). Mexico and Brazil, however, dominate when it comes to mobile ad impressions, based on data from Millennial Media’s own network. Between them, they accounted for more than half (53%) of impressions in Latin America in the first quarter.

The next closest were Colombia and Argentina, with about 7% each. “Population size does not always indicate mobile use. Brazil’s population is approximately twice that of Mexico’s, yet we see a greater percentage of impressions from Mexico,” noted the Millennial report. Latin America is also Android country, with 72% of impressions on the Google mobile platform, and only 22% from iOS.

That’s partly because of the popularity of Samsung devices. The Korean device maker claims about 40 % of the mobile market, by impression, with Apple capturing 21%, and LG, about 7%. Among mobile ad categories, retail, consumer goods, pharmaceuticals, telecom, and travel were the top five in the region in the first quarter.