Walgreens Promotes 'Get a Shot. Give a Shot' Cause 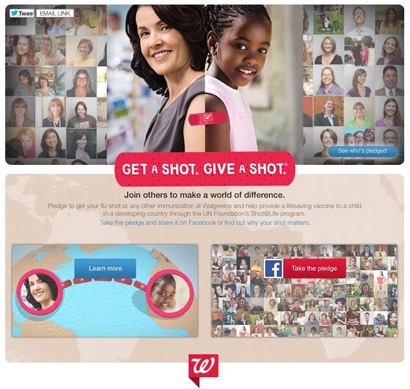 In an effort to stand out from the increasingly crowded retail health clinic scene, Walgreens is promoting its “Get a Shot. Give a Shot” program for the second year running.

The cause-marketing effort, timed to coincide with both the busy back-to-school immunization period and the beginning of flu shot season, is a partnership with the United Nations Foundation, and provides vaccines for kids in developing countries.

The retailer is promoting the campaign with TV, digital, social and out-of-home ads from GSD&M. It includes a Facebook app that lets people pledge to get their flu shots at Walgreens this year, and share with friends across social channels. Each pledge triggers the donation of another vaccine. A photo of the person then becomes part of large photo collage on the homepage of the app, as well as in an out-of-home display in Denver.

The company says the effort is part of its healthcare mandate, and hopes to help the one in 5 children in the world who lack access to life-saving immunizations. The UN reports that a child dies every 20 seconds from a disease that could have been prevented by vaccination, including whooping cough, measles and polio.

The creative team, which traveled to Tanzania with Walgreens and UN employees, created a video about the experience, interviewing local healthcare professionals as well as Walgreens pharmacists. It features dozens of children, as well, helping them reframe their aspirations from “If I grow up, I want to be…” to “When I grow up…”

“It is rare to work on a project that can have such a profound effect on other peoples lives,” Bryan Edwards, SVP/group creative director at GSD&M, tells Marketing Daily. “Going to Tanzania and seeing the difference the program is having in the lives of these children was humbling, to say the least.”

The Deerfield, Ill.-based retailer, which says the current offer extends through Oct. 13, says it will then extend the program as a year-round effort, and says it hopes to provide 6 million vaccinations through the UN’s Shot@Life campaign. That doubles last year’s results, which provided 3 million shots.

Walgreens, along with retail rivals CVS, Target, Walmart and many supermarket chains, is playing an increasingly important role in American healthcare, offering more vaccines and routine medical care options, often at lower rates or with more convenience than doctors provide. And Walgreens also works closely with the federal government, and is now in its fifth year of a flu shot voucher program, providing shots for about 1 million uninsured or underinsured individuals nationwide.

Meanwhile, the U.S. Centers for Disease Control and Prevention says there is no way to predict either how bad the coming flu season will be, what strains of the disease will be most prevalent, or even when outbreaks will peak. “Flu activity most commonly peaks in the U.S. in January or February,” it says in a statement. “However, seasonal flu activity can begin as early as October and continue to occur as late as May.”