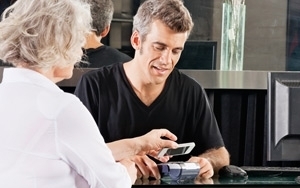 Apple’s announcement last month of a new mobile payment service — Apple Pay — brought a fresh wave of optimism around paying at checkout with the tap of a mobile phone. But a new report suggests consumers won’t be throwing away their leather wallets just yet because they still find credit and debit cards a convenient option.

The eMarketer forecast projects mobile proximity payments — where mobile phones are used at the point-of-sale (POS) in lieu of cards or cash — won’t gain more mainstream adoption for several years. Still, total U.S. transaction volume will more than doubled to $3.5 billion this year, before reaching almost $9 billion in 2015 and tripling to $27.5 billion in 2016.

"The more things change in the U.S. mobile payments space, the more they seem to stay the same — at least in the short term," stated Bryan Yeager, an eMarketer analyst and the report author. "Despite a wider range of available technology and adoption from more merchants, consumers remain tepid about paying for goods and services with their phone at the point of sale."

One of the key factors for wider adoption is how quickly retailers roll out new POS terminals that accept cards embedded with a chip. In the process of upgrading to the new terminals — which is required by October 15 for retailers to avoid card fraud liability — many are also expected to add contactless readers to be able to handle payments from NFC-based mobile technologies like Apple Pay.

But it remains to be seen when and if merchants turn on the contactless payment function. That transition could take even longer among small and midsized businesses, pushing out mainstream adoption of mobile payments even further. Currently, only 7% of U.S. merchants accept NFC in any capacity.

Apple has said iPhone 6-equipped customers will be able to start using Apple Pay this month with a select group of national retailers, including McDonald’s, Macy’s and Staples, at some 220,000 locations nationwide. Not all retailers will be on board. Some, most notably Wal-Mart, are part of the competing Merchant Customer Exchange (MCX), and won’t work with Apple on payments.

Regardless of the payments system, the average consumer so far hasn’t shown an eagerness to embrace paying by phone in stores. A study by the Federal Reserve board, for example, found 76% of mobile phone users think it’s easier to pay with a card, and 61% don’t see any benefits from mobile payments.

"Apple Pay will do a lot to bring consumer awareness to mobile payments, but it still has to work," Yeager noted. That means if customers have an initially rocky experience with Apple Pay, they may think twice about trying it again. It also puts the onus on retailers not only to install NFC-enabled scanners but related training for sales staff.

As people become more comfortable using their phones for mobile proximity payments, the firm also predicts the size of transactions will grow. This year, for the first time, the majority of proximity payments will be above $20. That’s in part because eMarketer is including in-app payments that occur at the point-of-sale on platforms like Uber and OpenTable. Annual spend per proximity payment user will reach $220 this year, but over $2,000 by 2018, eMarketer projects.