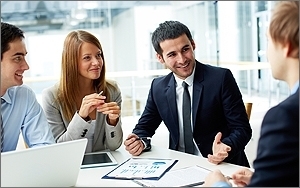 If you’re looking for an easy way to increase creative productivity — and crank out more good ideas — it may be as simple as sharpening your organization’s social IQ.

It all comes down to simple hacks that can improve flaws in the way new ideas flow through organizations, says David Shrier, managing director of connection science and engineering at the Massachusetts Institute of Technology. Looking at data it has collected about group dynamics, much of it from social media, “it’s possible for us to see who really influences our behavior,” and increase productivity by as much as 17%.

In a presentation for the 4As’ CreateTech in Cambridge, Mass., last week, he offered a handful of MIT-proven methods to boost the collective IQ of teams:

Revisit the jerk-o-meterMIT students first introduced this almost a decade ago, and it has since evolved into a device known as a Meeting Mediator. Without analyzing content, it uses voice recognition to tell which windbags are hogging all the airtime. “Groups dominated by one person have a lower collective IQ,” he says. “In a balanced meeting, it’s higher.”

Add women “Teams with women perform better than all men. On average, women tend to score higher than men on emotional IQ, and that is far more predictive of productivity than the highest IQ in a group, or even IQ of total company.”

Set up chairs by the water cooler Since better group outcomes depend on close ties among co-workers, it pays to foster places where those face-to-face encounters can happen. “The water cooler works,” he says. “Structured meetings do not build trust.”

Swear off conference calls “Physical proximity is superior to any form of electronic communication.”

Work under glass While he says he isn’t a fan of open seating because it can be distracting, he concedes that, on average, it improves idea flow. “I’d call it a jump ball,” he says. An alternative: Glass doors or glass walled offices so people can see when you are available.”