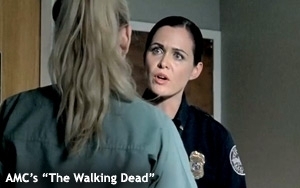 Facebook has been trying to get itself into the TV/second-screen picture for a while now, insisting that Twitter is not alone in being a second screen for prime time. Taking on the weekly Nielsen “Twitter TV Ratings,” which counts tweets about the previous week’s programming, this week Facebook launched the "TV Obsession Index" with The Hollywood Reporter. While Nielsen is counting tweets about shows, Facebook is counting share of TV mentions on the social network about specific programming.

In its inaugural list for the week of Nov. 24-30, it's not surprising that AMC’s “The Walking Dead” tops the list of most-discussed shows on Facebook, as it did on Twitter. In this case the zombie fest grabbed 14.1% of TV-related discussion. On Twitter the show inspired 773,000 tweets for a reach of 5.1 million. Unlike the Twitter ratings, which track the actual number of tweets three hours before and after a broadcast,  Facebook appears to be tracking overall share of conversations and is not specifying the time window.

But there are considerable differences between the two lists for the same week. The Twitter list is heavy on reality programming and sports, with “Dancing With the Stars," “The Voice”, “2014 Soul Train Awards” and WWE Monday Night Raw” dominating the list. On Facebook, however, the list was dominated by scripted programming:

According to THR reporting from Facebook, the chatter on the social network is coming principally from women.  While Facebook is not providing show-by-show breakdowns based on gender, it does say that 60% of "Walking Dead" comments generally come from women and that nine of the 1- most-discussed show skew female in their source of comments. In fact, "American Horror Story" has about two-thirds of its mentions coming from women.

It will be interesting to see deeper metrics from Facebook about the kind of exchanges, volume, timing, etc. associated with TV-related activity on the network. Especially interesting would be the age demo breakdown and comparison with Twitter. I have seen the company in the past try to make the case that Twitter is not the only real-time second-screen engine on the block. But the dominance of scripted programming and longer-tooth shows like "SNL," "Big Bang Theory" and "Doctor Who" suggest an older skew.

No doubt we will learn more when Facebook starts pitching its inevitable TV-focused ad products.