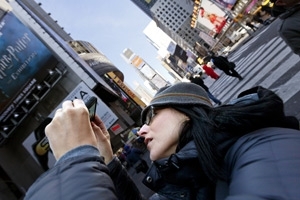 Outdoor advertising and mobile devices are overlapping more and more, but not always in the ways you might expect. While many outdoor ad companies are integrating mobile interactivity into signage with beacons, near-field communication, scannable codes and watermarks, JCDecaux is going a step further. It is boosting mobile connectivity with “small cell” deployments incorporated into its signs.

The small cells improve wireless service near the signs by increasing the amount of data that can flow to and from mobile devices, improving voice reception quality and enabling better 3G and 4G connections for data-intensive applications in both indoor and outdoor areas.

Although their range is limited, large numbers of small cells can be installed unobtrusively in multiple sign structures, boosting mobile reception and data capacity over a wide area, generally in conjunction with distribute antenna systems and repeaters.

As part of an agreement with Vodafone, the world’s third-largest mobile provider, JCDecaux will deploy small cells on street furniture and billboards around the world, giving it access to over 100,000 JCDecaux-owned or controlled properties, primarily in Europe, Asia, and Australia. Altogether JCDecaux’s signage portfolio includes over one million billboards and other types of signage globally.

The companies have already collaborated on a test installation of more than 160 small cell stations on bus shelters with JCDecaux ad surfaces throughout Amsterdam. JCDecaux has also struck a similar agreement with Huawei for “crowd-sourcing” small cell deployment.

Although the Vodafone partnership doesn’t currently include an advertising component, improving mobile connectivity near signs holds out the possibility of mobile marketing campaigns coordinated with nearby signage, taking advantage of information about user locations to reach consumers on the go.

Over the last year, there have been a number of deals between outdoor advertising companies and mobile operators to enable such campaigns. Last year, for example, Posterscope’s U.K. operation signed a deal for mobile network usage data from EE (Everything Everywhere), the largest mobile network operator in Britain.

The Posterscope-EE deal includes anonymized data on consumer movements and location-based digital behaviors, including how, when, and where mobile devices are used in relation to outdoor media, and what mobile Web sites and mobile apps people visit on their smartphones.

Also last year, Posterscope’s U.S. operation unveiled a partnership with xAd that allows advertisers to use xAd’s location data and “SmartFencing” (geofencing) capability to target mobile users in the vicinity of a Posterscope ad with additional ad messages, promotions and directions to a nearby store.

"Woman using her Smartphone to take photos in Times Square" photo from Shutterstock.