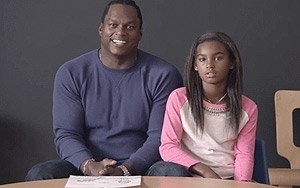 For its Super Bowl gambit, Toyota is talking about a scarce resource for a lot of American kids these days: dads. But first, while automotive Super Bowl advertisers pull out the stops when it comes to famous faces (Chrysler especially with Eminem, Clint Eastwood, Bob Dylan), Toyota is really going all out. One of the two 60-second ads on Feb. 1 is voiced by one of the best-loved people ever: Muhammad Ali, who will be in a Super Bowl XLIV pregame spot for Toyota. The boxing great has not been well at all lately: he has been hospitalized twice in the past month with an infection.

That spot features Toyota athlete, Paralympic medalist and “Dancing with the Stars” finalist Amy Purdy. The second spot, which continues the theme, airs in the second quarter of the game.

The lead-up to the dad-focused campaign, “One Bold Choice Leads to Another,” via Saatchi LA, began Jan. 16 with the first of a series of Web videos extolling the virtues of fatherhood, and of the 2015 Camry sedan, the top-selling sedan for a long time and a car that pretty much hits the “family car” target in the bullseye.

The videos, which are being released sequentially leading up to the game, feature fathers, famous and otherwise. The simple creative has them in chairs, with blank walls behind them, talking frankly, extemporaneously, about fatherhood. The three-minute kickoff video shows NFL players like former Super Bowl MVP Kurt Warner and former linebacker LaVar Arrington recalling lessons they learned from their dads and how they have brought that to their own parenting.

Then their kids show up and comment on their dads’ parenting. Also in the video are current players like running back Fred Jackson and defensive end DeMarcus Ware. And their kids. The Camry is only shown at the very end -- a front shot, with the super, “The Bold New Camry.”

Said Jack Hollis, group VP of marketing, Toyota Motor Sales, in a statement: “Much as we did for the Camry launch last fall, we will take a bold and unconventional approach -- one that matches the content of the vehicle and invites our guests to engage with the new Toyota.”

The campaign includes a social element that started Jan. 16 on Twitter. Toyota says users can tweet photos of their dads using the hashtag #OneBoldChoice.

Toyota also has title sponsorship of the halftime report on NBC, and will run a video vignette called the “Toyota Gridiron Challenge” on game day, featuring Toyota NASCAR drivers and retired football players.

Other automakers in the game: Mercedes-Benz, which sat out last year, will be back for its third go with one spot in the game. BMW will have a spot in the first quarter; Kia is back for the sixth time, with former James Bond and Remington Steele Pierce Brosnan pitching; and Lexus will tout the new NX with an ad it just released.