Empirical Data Proves TV Now As Accountable As Digital, Brands Can Have Their 'Cake, Eat It Too'

New empirical research revealed Tuesday by a mix of respected industry experts made the case that marketers need to shift from a decades-old practice of “reach optimization” to new methods of “results optimization,” especially when factoring the most precious media in their mix. The research, which was presented during a special webinar from the Advertising Research Foundation and at a live event at programmatic TV developer Simulmedia’s New York headquarters, showed that when brands measure the return on their TV advertising investments based on the incremental sales they generate, they get better results.

One of the examples presented, an explicit case showing actual sales results for an ecommerce marketer participating in a campaign managed by Simulmedia, resulted in an ROI of $45.17 for every TV dollar spent. Significantly, the result was not measured by modeling, fusion, single-source panels, or theoretical research, but an actual dollar-in/dollar-out analysis using the advertiser’s TV budget and proprietary sales data.

“Linear TV advertising is now as accountable as digital,” proclaimed Simulmedia Founder and CEO Dave Morgan. As one of the pioneers of digital ad accountability -- first at 24/7 Real Media and then behavioral targeter Tacoda and AOL -- Morgan should know. And he’s built Simulmedia on that the same framework -- that if you could reorganize the way people use television to target consumers and measure the results empirically, you will make it more effective and more accountable.

The secret, Morgan implied, was not in math, but in the fact that TV advertising has powerful effects and that if used more scientifically, can work even better. The case study, as well as examples presented by industry guru Bill Harvey, founder of single-source measurement platform TRA, and CBS research chief Dave Poltrack, made the same point -- all with empirical proof, not fusion, modeling or theory. Just dollar-in/dollar out analyses.

The cases drew another important line for the ad industry, especially for television, effectively moving it from a so-called “long-term brand effects” medium to a performance medium. That’s something the TV industry has historically resisted, because performance media, like direct-response and early-stage digital platforms, historically commanded lower media costs than media that are perceived to have more powerful branding effects. The presenters at the ARF webinar seemed to be making the case that a new way of thinking about performance media is now required, one that downplays long-term branding -- for now -- but keeps it implicit.

Several attendees reacted immediately to that point -- including the 4As’ Mike Donahue and industry consultant Bob DeSena -- raising questions about the implications of that shift for branding.

“It seems to me the major trend is a direct marketing mentality coming to brands,” direct marketing vet DeSena noted, adding:  “What direct marketers have always known is the two most important things -- after product -- is the target and the offer. How does that translate when you say don’t take it out of TV?”

DeSena’s question addressed the fact that all three presenters made the case that reductions in TV spending -- especially more expensive, high-rated mixes of TV inventory -- always result in lower returns. Those cases were a direct challenge to the current trend among big marketers and agencies to boost digital spending by shifting it out of TV. The cases argued it is not just antithetical, but counter-productive.

CBS’ Poltrack responded by noting that it was always very easy for direct marketers to prove the return on their investment, because they were able to correlate dollars spent vs. dollars returned via a closed-loop system. Now, because of research that companies like CBS, Nielsen, Simulmedia, TRA and others are doing, it is possible to correlate it with campaigns that historically have been viewed solely on a long-term branding basis.

Simulmedia’s Morgan added that brand advertisers will have their cake and eat it too, because the new methods will enable them to target TV more effectively in terms of results, but they will still be able to buy it on a CPM basis.

Morgan asserted it will happen with TV, because its already what digital platforms have already done. “You get long-term sales effect for free,” he concluded. 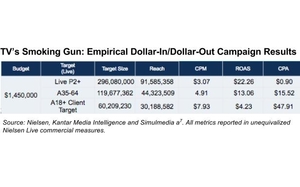 programmatic, tv
14 comments about "Empirical Data Proves TV Now As Accountable As Digital, Brands Can Have Their 'Cake, Eat It Too'".
Check to receive email when comments are posted.
Read more comments >
Next story loading