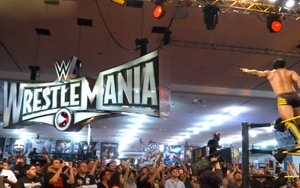 Continuing its foray into original video content, Facebook has secured an exclusive distribution deal with the WWE.

This Sunday, Facebook plans to carry content before, during and after WrestleMania 31, including wrestlers’ ring entrances, match clips, interviews, locker room banter, and training videos. Financial terms of the deal were not disclosed.

The “Facebook Trending Experience,” so-called, will also feature comments and posts about WrestleMania 31 from wrestlers, celebrities and users’ own “friends.”

During the telecast on Sunday, WWE’s on-air announcers will encourage fans watching WrestleMania on WWE Network and pay-per-view to check out the extra fare on Facebook.

Fans in attendance for the big brawl at Levi’s Stadium in San Francisco will also be encouraged to check in and join the conversation. These “in-venue activations,” and other components of the deal, are a first for Facebook and WWE.

Leading up to the big event, WWE wrestler Zack Ryder is leading a “Hide and Like” promotion, which invites fans to try finding him in the San Jose area for a chance to win tickets to WrestleMania 31, and other WWE events.

The effort was spearheaded by Dan Reed, Facebook’s Head of Global Sports Partnerships. Last year, Facebook poached Reed from the NBA, where served as president of the league’s minor-league operations.

In 2013, meanwhile, Facebook acquired SportStream -- a start-up specializing in the aggregation and analysis of sports-related social conversations and content.