What The Hell Are You Watching Now?: The New "TV" Experience 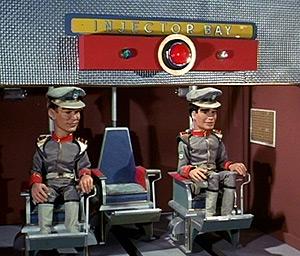 There is a signature pause in my wife’s step that precedes her asking for the umpteenth time in our marriage some variation on “what madness is this, then?“ (a subset of “what did I marry?”). I was asking for it this time. Deep inside my Roku app box on the Shout Factory channel, I had discovered episodes of the 1960s “Stingray” series. This Saturday morning filler on local channels was a sci-fi adventure in “supermarionation": the weird technique that inspired Trey Parker and Matt Stone’s “Team America” film.

“What the hell?” Now at full stop at the spectacle of marionettes barking military orders without a whiff of irony.

“Science fiction with puppets,” I explain -- as if that were any kind of explanation.

Admittedly, my TV stopped being a “TV” as we have known it for years. I have been testing OTT boxes since before the Apple TV. My aging Sony HDTV and home theater receiver are clogged to capacity with HDMI inputs (Apple TV, Roku, Chromecast, Fire TV, PS3, Xbox One, plus the DISH receiver and VOD). The poor woman has no idea what to expect when she walks into our living room unprepared: “Cabinet of Dr. Caligari” via Fandor, My “Watch Later” Soupy Sales clips, Disney WWII cartoon propaganda, or uniformed marionettes with creepy eyebrows that appear to have been stripped from shag carpeting.

TV is not TV anymore. It has quickly become an on-demand museum of a century of video. And according to the IAB’s latest study of changing TV habits, I am no longer alone (save, perhaps the supermarionation fetish). About a third of Americans now have some way of streaming digital content to their TVs, either directly on a connected TV or via OTT boxes and game consoles.

But this TV-Next set is very bad news for traditional TV, since 38% of the group now says they spend half of their TV time with streaming media. About half of the connected TV viewers say they prefer streamed media because there are fewer commercials, and 40% find the ads on these platforms less bothersome. The genie is out of the bottle. Half of these users say the new options for content on TV are as good as traditional TV, while 25% say it is better.

Not surprisingly, Netflix is a key driver of the connected TV world, with about three-quarters of these smart TV owners using Netflix and YouTube content. Half of these new Tv audiences stream traditional TV shows and about 40% say they view hulu. Overall, 35% of connected TV users day they are using more streamed media than a year ago and 19% say they are watching less traditional TV.

For those of us using app-based boxes like Roku and Fire TV, dynamically served in-stream video spots have become commonplace, if not always elegant. One brand that stands out is Method cleaning product, whose ads seem to pop up everywhere in my obscure Roku and Fire TV apps. They are memorable not only because I don’t see them advertise elsewhere on TV but because the ads are ironic takes on new suburban life: for example, a spaghetti-eating toddler launches a saucy meatball at Dad’s white shirt back. The tone seems well-targeted to the likely demo for a Roku box.

The problem for dynamically served OTT ads is timing and redundancy. I have seen the same Method ad countless times and in just about every pod.  Some of the larger services like Sony’s Crackle do a better job of finding suitable breaks in the movies and TV episodes for advertising. But most of the niche content apps are relying on networked in-stream ads that do a lousy job of finding natural breaks.

Still, we are starting to see the first instances of truly interactive OTT advertising. I have already encountered several spots on Amazon’s Fire TV that let me click through to TV-optimized landing pages for more content and interaction. The experience was smooth, and in general the content was a welcome extension of the spot. Done with discipline, one of the dreams of the Interactive TV era may well be upon us.

connected tv, data-targeting, itv, tv, video
1 comment about "What The Hell Are You Watching Now?: The New "TV" Experience".
Check to receive email when comments are posted.
Next story loading