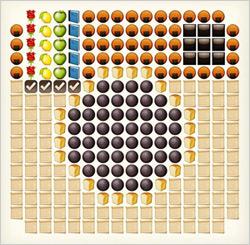 Do you speak emoji?

Brands vying for attention on Instagram and other social networks had better be fluent in the ubiquitous ideograms.

In fact, nearly half of all comments and captions on Instagram now contain the colorful characters, the Facebook-owned social network finds.

“If the overall trend continues, we might be looking at a future where the majority of text on Instagram contains emoji,” Thomas Dimson, a software engineer on the Instagram Data Team, writes on a new blog post.

With clear implications for brand and agency partners, Instagram is trying to make sense of emoji usage.

Among other seemingly semantic relationships, emojis related to shoes are associated closely with handbags, while bathing suits cluster closer to representations of water and marine animals. Alcoholic drinks, meanwhile, appear to cluster together with bowling.

“By observing words and emoji together we [are] able to discern representations of both,” according to Dimson. “These representations can help us better understand their semantics and find distinctive characteristics of similar symbols.”

Sure to accelerate their use, Instagram recently added support for emoji characters in hashtags, so users can tag and search content via various emoji.