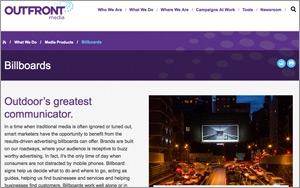 Outfront Media, formerly known as CBS Outdoor, saw total revenues increase in the first quarter of the year, thanks to acquisitions and organic growth.

This is the second full quarter of results reported by Outfront since it converted to a Real Estate Investment Trust in mid-July 2014.

In regional terms, growth was powered by Outfront’s U.S. assets, which makes up the bulk of its business. Revenues increased 5% to $267 million on an organic basis, more than offsetting a decrease in international revenues, down 8.8% to $30 million, due to foreign currency fluctuations.

Outfront, then known as CBS Outdoor, was spun off by CBS Corp. as an independent company in the first half of 2014, and converted into a real-estate investment trust in order to lower its tax burden.