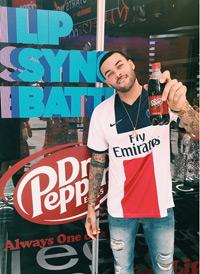 With the help of social-influencer marketing start-up Speakr, the soft-drink brand is teaming up with popular show "Lip Sync Battle" to celebrate #OneofaKindLipSync.

While the platforms keep changing, the idea behind influencer marketing remains the same, according to Andrew Barker, director of media and entertainment for Dr Pepper.

“Our expectation is that these social influencers will position Dr. Pepper as a brand that brings fans closer to their favorite show,” said Barker.

The campaign officially kicked off with the Lip Sync Booth in Times Square on Tuesday. Speakr’s social influencers were expected to post on Twitter and Instagram and invite their followers to join them in Time Square on Tuesday.

Passersby and invitees were encouraged to join the battle by lip-syncing songs, then sharing their performances on social media with the hashtag #OneofaKindLipSync.

The best acts will then be featured on a future episode of "Lip Sync Battle." At the end of the season, one #OneofaKindLipSync fan will also receive a VIP trip to attend a taping of Season 2. The influencers should also have asked their followers to help them choose one of four songs to lip sync to during their battle, and then live broadcasted the event on Periscope and Snapchat.

Marco Hansell, CEO of Speakr, is predicting that the campaign kickoff will generate at least 1 million social engagements before the end of the week. That’s “based on our predictions,” Hansell said.

However, many marketers still feel that they lack the resources to use consumer-generated content in real time and in a meaningful way, according to recent findings from social analytics firm Wayin.
ad campaign, beverages, social media, tv
Next story loading