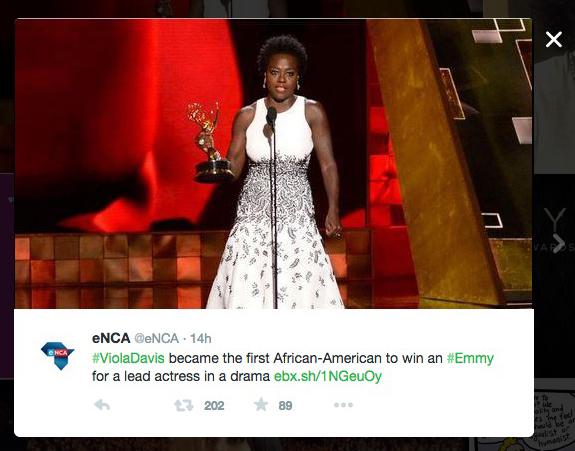 Along with her historic award, Viola Davis took top honors on Twitter during the 67th Primetime Emmy Awards.

The first African-American woman to be awarded an Emmy for outstanding lead actress in a drama series, Davis generated 94,482 from 8 p.m. and midnight on Sunday, according to fresh findings from Amobee Brand Intelligence.

That was more than double the 41,002 tweets tweeted in response to Jon Hamm finally winning the award for outstanding lead actor in a drama series for "Mad Men" -- and then making one of the more unusual stages entrances in Emmy history.

The brand winner of the night was HBO, thanks to a bit by host Andy Samberg, which involved him sharing real HBO Now sign-in information. (Though very real, most users couldn’t access the service using Samberg’s shortcut, because of its overuse.)

All told, there were 1,386,621 tweets that directly mentioned the Emmys or Emmys related hashtags between 8pm and midnight, on Sunday.

During that time frame, Twitter sentiment around the #Emmys hashtag was 44% positive, 48% neutral -- meaning no opinion was detected -- and 8% negative, according to Amobee’s calculations.