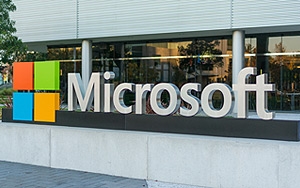 Due largely to slower sales of smartphones and its Windows operating system, Microsoft saw revenue decline 12% -- from $23.2 billion to $20.38 billion, year-over-year -- during its fiscal first quarter.

Yet a robust cloud-services business helped Microsoft beat quarterly estimates, and post net income of $4.62 billion, or 57 cents a share, during the period.

Revenue from the company’s Intelligent Cloud business grew 8% -- up 14% in constant currency -- to $5.9 billion, Microsoft said during its earnings call on Thursday.

Over the past year, Microsoft saw its commercial cloud run rate increase by 70%, according to Kevin Turner, chief operating officer at Microsoft.

Although not enough to impact Microsoft’s bottom, the software giant also saw Bing achieve profitability for the first time since the search engine’s big debut in 2009.

Microsoft attributed the success of its search engine to solid Windows 10 adoption and usage. Along with baking Bing into more products and services, the engine has been boosted by Microsoft’s partnership with Yahoo.