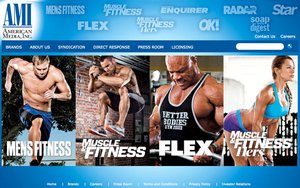 AMI has reported a record year for its digital properties, with growth in both digital audience and revenue for fiscal year 2016.

Digital revenue grew to 42% from the previous year and now represents 20% of AMI's total advertising revenue.

The Celebrity and Entertainment network -- which includes National Enquirer, Star, OK!, Globe, Radar Online and Soap Opera Digest -- grew by 27% in both unique visitors and social followers over the previous fiscal year.

Earlier this month, AMI announced that its Celebrity network reached an all time high of more than 30 million unique visitors and 265 million page views in July.

AMI attributed much of the success of these two networks to millennials, categorized as 18-34s by the company. It is also embracing a new look and focus for company properties.

“Over the last year, AMI has redesigned almost every site in our network with a focus on mobile platforms, reader engagement and quality advertising environments,” stated chief digital officer Brian Kroski.

In December, AMI released a new mobile smartphone app for one of its tabloid brands, The National Enquirer. The launch followed an increase in both social media traffic and mobile traffic for the publication, at 64% and 108% growth year-on-year, respectively.

This was good news for a publisher that started out 2015 with $326 million of debt, forcing AMI to sell Shape, Natural Health and Fit Pregnancyto Meredith Corp. last January.