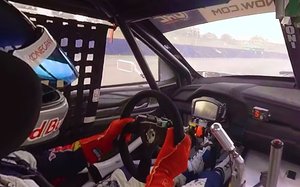 The view is from a 2016 Red Bull Global Rallycross Honda Civic at a Red Bull GRC race and was filmed with a spherical VR rig, using GoPro cameras during a heat race at the series event in Washington, D.C.

The immersive experience gives audiences a first-person view of what it feels like to race from every angle — from the sharp turns to the sudden jolts and even the series’ signature 70-foot tabletop jump.

The video, created by RPA, will also live on the Honda 360 YouTube page, RaceWithHonda.com, as well as Honda’s and GoPro’s social media channels.

The effort is aimed at racing enthusiasts, thrillseekers, and anyone excited to see what a ride in a GRC Civic on a Red Bull Global Rallycross track feels like, says Nick Lee, manager, Honda national advertising.

“This type of immersive video allows customers to engage in content in a way that’s never been possible before,” Lee tells Marketing Daily. “By putting a customer in the front seat of the Global Rallycross Civic or in an Indy car 2-seater at the start of a Verizon IndyCar Series race, it gives them a taste of what it means to live the Honda brand.”

Race fans can experience this on-site at the Red Bull Global Rallycross Los Angeles presented by Honda event on October 8 and 9 at the Port of Los Angeles in San Pedro, CA. Everyone who purchases a ticket to the event will be able to take advantage of this experience at the Honda tent, which will be located near the main entrance of Red Bull GRC LA.

Honda dealers across the country will receive virtual reality goggles for customers to “test-drive” the Red Bull GRC Honda Civic in a whole new way.

“We are excited to have been working with various partners like GoPro, USA Today, INDYCAR and Red Bull Global Rallycross to create truly ‘edge of your seat' 360º videos,” Lee says. “In addition to the aforementioned videos, we are working on a new project to launch our winter Sales Event, Happy Honda Days, in December.”

Video has come to be an essential format in social media, Lee says.

“As technology continues to evolve, ‘immersive video’ is primed to be the next frontier in the visual-media landscape,” Lee says. “We at Honda are proud to be at the forefront of this emerging technology, and are always striving to be innovative, youthful and exciting. We have only scratched the surface of immersive-video-content creation, but will continue to offer new and amazing video content.”