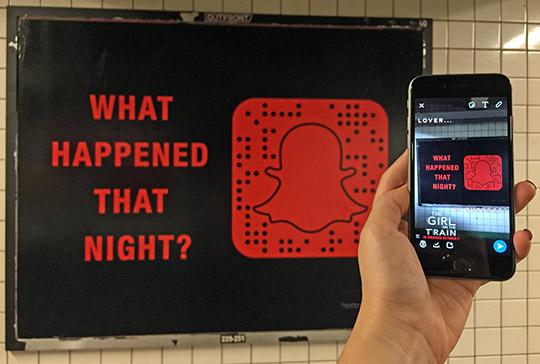 Universal Pictures is supporting the thriller “The Girl On The Train” with a Snapchat campaign that encourages viewer interaction. This is the first time that out-of-home has been integrated with Snapchat to promote a film. Also, ‘Girl’ is the first film to utilize the social network’s "snap to unlock" feature.

As part of the project, Universal Pictures and Kinetic Worldwide – with an assist from Maxus – have placed billboards featuring the codes and the cryptic line "What happened that night?" across subway stations so travelers waiting for their train can engage with the upcoming film across the Snapchat platform. These ads appear in subway stations in New York, Los Angeles, New Jersey, Chicago, Boston, Philadelphia, and Washington D.C.

Once presented with the ad on subway platforms, users who are familiar with Snapchat and its scanning system – primarily millennials, who are the film’s targeted demographic – know to scan the code. They will then be taken to special, hidden geotag filters, created to promote the film further.

The film's advertising is also utilizing a more traditional media mix of out-of-home, digital, broadcast, and online. In its first weekend of release, the movie came in number one at the box office, earning $24.5 million.