TV Takes You There: The Joys Of Postseason Baseball 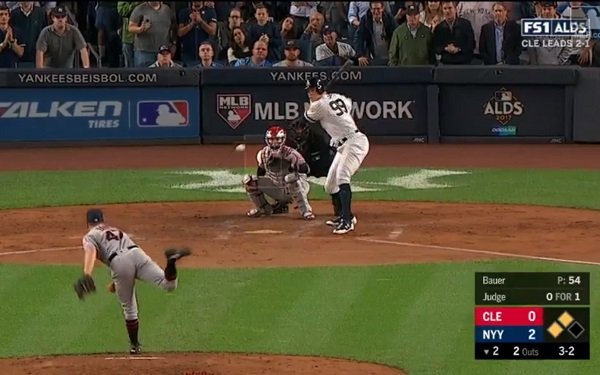 The extreme length of playoff baseball games is often a subject of complaint at this time of year, but there is a benefit too.

After watching the first four games of the Yankees-Indians series on Fox Sports 1 over the last few days (Game 4 photo above), it occurred to me that a long baseball game is not only entertaining for strictly baseball reasons.

It is also beneficial because once you are engaged with one of these epic games, the activity of brainlessly grazing up and down the cable lineup for something to watch can be set aside for a night for as long as four or five hours.

Your viewing decision is already made. There's a playoff game on. So why graze?

Certainly, long baseball games are not everyone's cup of tea. And in past seasons, I have written plenty of columns decrying their length -- particularly when they drift past midnight.

That's past many of our bedtimes and, more to the point, past the bedtimes of many children who Major League Baseball might just want to cultivate as its next generation of fans. Where baseball's fan base is concerned, I read recently that MLB games comprise the oldest-skewing professional sport in the U.S.

More and more today, baseball is a strategic game punctuated occasionally by action. These days, particularly when the playoffs are on the line, the strategy is positively chess-like.

Social critics will complain that a generation of kids weaned on YouTube and video games cannot be acclimated to baseball's slow, strategic pace.

To which I reply: What about all of those feelgood chess movies that come out every once in a while in which kids are seen becoming enthralled by -- and expert in -- chess?

Perhaps the ins and outs of pitching changes can be positioned in such a way that baseball can become the “thinking kids” game.

Besides, when there is a break in the action in a playoff game, the telecast's director gives you plenty to look at. A lot of it consists of men spitting things out of their mouths, but still …

During this Yankees-Indians series, it seems as if nerves on the field and in the dugout are frayed indeed. All of the chewing and spitting makes it seem that way.

In Monday night's game, Fox cameras even caught one of the Indians (I think it was Carlos Santana) in the field maniacally unwrapping some kind of sucking candy and popping one after the other into his mouth. He unwrapped so many of them that it seemed like he must have filled his pockets with them.

And it's no surprise to any fan who is familiar with Terry Francona that the Indians manager is this series’ most prolific spitter and chewer.

He seems particularly fond of some sort of seeds that he ingests by the fistful. He was once well-known for his fondness for chewing tobacco, but apparently MLB frowns on that now.

Still, when watching the games and observing the mess these players and their coaches make in the dugout, I can't help but feel sorry for the clean-up crew.

These details -- such as the closeups of various fans in the stands that the cameras take in throughout baseball telecasts like these -- might not seem important to many people.

But baseball telecasts have a way of drawing you into the game and its surroundings like no other professional sports telecasts. At their best, baseball telecasts do what TV is supposed to do, at its essence, which is: To take you somewhere you cannot go yourself.

I have had this thought many times over the years and I had it again Monday night while watching the Yankees-Indians game on TV. Sure, it might be exciting to actually attend one of these games. But the telecast made me feel that that was not especially necessary.

And when it was over, all I had to do was turn off a light and go to sleep.