To Reach Younger Girls, Dove Teams Up With Cartoon Network 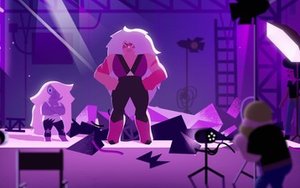 Dove, which has made boosting self-confidence a core part of its brand promise, is reaching out to its youngest audience yet, in a partnership with Cartoon Network’s Steven Universe.

The two-year deal, which Dove says is its largest outreach effort yet, includes six short films directed by Steven Universe creator Rebecca Sugar, which will run on the Cartoon Network’s website. (The first is already available.) A spokesperson for Dove says the program hopes to engage and educate 6- to- 14-year-olds, and that it is the only program currently in the works for kids.

Dove, owned by Unilever, has been pushing its message of self-esteem for girls and women since 2004, and the Dove Self-Esteem Project exists in 140 countries. Its committed to reaching 40 million young people by 2020, and by adding the Steven Universe effort, estimates it will now reach 20 million more.

The company says the new content, including its workshops, are based on scientific evidence from body-image experts. And it’s grounded in research that finds that more than half of girls do not have high body confidence, which can lead them to spend less time with friends and family, opting out of life events and putting their health at risk.

A new song featuring the cast of the show, as well as a music video and eBook are in the works for later this year.

Steven Universe is Cartoon Network’s first animated series created by a woman and focuses on themes of inclusivity, empathy and relatability.

While much of Dove’s research focuses on girls’ confidence, a new report from YouGov BrandIndex says the brand has officially vaulted over the gender divide, with men now equaling women in their purchase consideration of Dove haircare products, successfully closing the gap on the brand’s skincare and cosmetics products.

Dove, which launched its Men+Care personal care products eight years ago, has climbed from 19% of considering Dove hair products to 28% today, even with the percentage of women. And purchase consideration for Dove’s skincare products among men jumped from 30% in 2014 to 41% in its most recent index. (The YouGov BrandIndex is based on a daily sample of 4,800 people, or about 1.5 million interviews per year.)