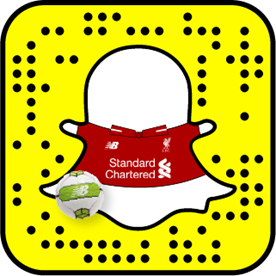 As brands, retailers and humans continue to dabble in the best ways to use augmented reality, New Balance says it is teaming up with Liverpool FC fans, unveiling a shopable version of the new team uniform. Fans can use Snapchat's AR feature to try on and then buy the new gear, all while listening to the Liverpool chant, heard before kick-off at every match at Anfield. The merchandise is available in both the U.S. and the U.S.

“It’s an innovative way to launch the Liverpool FC kit and to connect with fans during a huge moment — Champions League on May 26,” says Ryan Cassidy, New Balance’s marketing manager. “We’re tapping into the true passion by immersing fans into an augmented reality stadium experience that includes the ‘You’ll Never Walk Alone’ LFC anthem crowd chant.”

New Balance, which says it worked with HYFN, a Snapchat API Partner, for the effort, isn’t alone: Nike recently partnered with Messenger to use AR in launching the limited-edition Kyrie 4 Red Carpets, which it says sold out in under an hour. Fans "unlocked" the shoes using an emoji code, which then placed the shoe on a pedestal near them.

But a new study from ABI Research predicts AR isn't likely to help sell products in the ways people currently anticipate. While the report forecasts that retail sector will adopt the technology in a big way,“AR will struggle to take root among customers in the brick and mortar environment,” it says.

In stores, writes Nick Finill, senior analyst, “AR can disrupt the customer journey and provides little additional value overall.” But for store employees, AR can boost efficiency and improve service. It forecasts that by 2022, 120,000 stores will be equipping employees with smart glasses that help with front and back-of-store operations. And by 2020, it predicts AR experiences will generate 3% of e-commerce revenue.