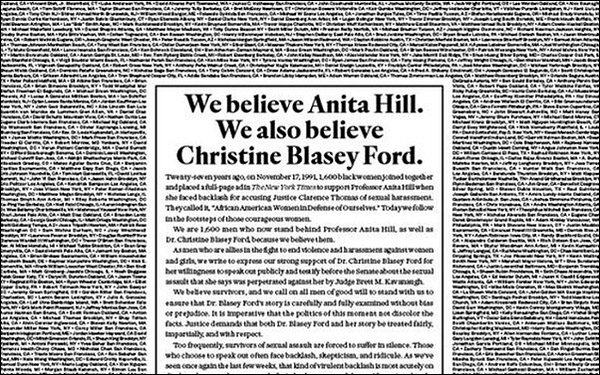 A full-page ad in The New York Times made quite an impact Wednesday.

Signatures from 1,600 men in support of Dr. Christine Blasey Ford and Anita Hill feature in a full-page ad in the Wednesday edition of the newspaper. Blasey Ford and Hill voiced their opposition to two Supreme Court nominees, accusing them of sexual assault, in 2018 and 1991, respectively.
Blasey Ford, a Palo Alto University professor, and Judge Brett Kavanaugh are testifying before Congress today after Blasey Ford accused the Supreme Court nominee of sexually assaulting her at a high school party in the 1980s.

Hill accused Clarence Thomas of sexual assault in 1991. He sits on the Supreme Court today.

The ad from Wednesday is modeled after a full-page ad published on November 17, 1991, when 1,600 black women signed a page to voice their opposition to Thomas and support Hill.

The names of the men surround a box of text, with the headline: “We believe Anita Hill. We also believe Christine Blasey Ford.”
The signatories deem themselves "men who are allies in the fight to end violence and harassment against women and girls" in the advertisement.

It reads, in part: “Too frequently, survivors of sexual assault are forced to suffer in silence. Those that choose to speak out often face backlash, skepticism and ridicule. As we’ve seen once again in the last few weeks, that kind of virulent backlash is most acutely on display whenever those accused of misdeeds are powerful men. If appointed to the Supreme Court, few men would be more powerful than Judge Kavanaugh."

It continues: “We are a group of men with varying political and legal views. But we each believe women should no longer have to carry these burdens alone.”

“For decades, a culture of misogyny has allowed men to act with impunity and without consequence. We demand an end to that culture, and we pledge to do our part in dismantling it.”

The signatories demand "a just process, and for the rights of women like Dr. Blasey Ford to be heard fully, fairly, and with respect.”

The ad was organized by several organizations and companies, led by the Phenomenal Woman Action Campaign.
All funds raised above the cost of the print ad ($100,000) will be donated to Futures Without Violence to support violence-prevention programs in schools.